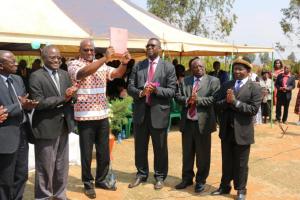 Lilongwe: On 18 August the Malawi Government launched the National Alcohol Policy at a ceremony that took place at Kantchito Primary School Ground at Bembeke in Dedza District. The guest of Honor for the auspicious occasion was Honorable Minister of Health, Mr Atupele Muluzi MP. Among the distinguished guests were the World Health Organization Representative Dr Eugene Nyarko, the Chief of Health Services, Dr Charles Mwansambo, the Chairman for Southern Africa Alcohol Policy Alliance, Mr Phillip Chimponda Francis and the Executive Director for Drug Fight Malawi, Mr Nelson Zakeyu just to mention a few.

In his remarks to the enthusiastic gathering the Honorable Minister Atupele Muluzi said that in Malawi alcohol is a legal beverage. He emphasized that the policy was not about stopping people from enjoying sips of the beverage, but that the aim of the policy was to deter people from indulging in heavy drinking which causes harm to themselves and others. “We know from the research studies that nearly 20% of men who are 25 to 64 years of age in Malawi drink alcohol heavily. This is worrisome because their behavior causes injury and death to themselves and others due to road traffic accidents and violent acts especially to women and children. In addition, these people tend to use up most of their hard earned cash that should otherwise be used to care for their families,” Honorable Muluzi said.

The Minister’s remarks echoed what the Group Village Headman Kamenyagwaza had earlier testified. The Group Village Headman had informed the audience earlier that harmful use alcohol was contributing to violent criminal acts and injuries and deaths due to road traffic accidents especially during market days. Most drunkards are hit by vehicles as they cross the Blantyre-Lilongwe M1 road at Bembeke market. He also added that many men young and old are dying due to many days of heavy drinking sprees on empty stomachs.

According to the STEPS survey for risk factors for NCDs conducted in Malawi in 2009, three quarters of the population aged 25 to 64 do not drink alcohol. However out of the people that drink, nearly a fifth of men (19.2%) drink alcohol heavily while a small proportion (2.3%) of women drink heavily.

Speaking to the audience the WHO Representative, Dr Eugene Nyarko, congratulated Malawi for producing a policy that is in line with the WHO Global Strategy to reduce the harmful use of alcohol and the AFRO Action Plan 2012 to 2020. He informed the audience that the WHO produced a package of interventions which when implemented by the member states are capable of reducing harmful use of alcohol in low and middle income countries.

e) provide brief psychosocial intervention for persons with hazardous and harmful alcohol use and this intervention requires trained providers at all levels of the health care system.

He concluded that having a national policy is the initial step towards curbing the global scourge. However, elaborating and implementing appropriate cost effective interventions that are in line with the policy is what will bring about the desired changes and impact. He further advised that the UN under the leadership of the World Health Organization would like the process not to end at the policy stage but that the Malawi Government through MOH and partners should move further to implement actions that will reduce harmful use of alcohol.

According to the WHO Global Status Report of 2014, hazardous and harmful use of alcohol globally is a contributing factor to death, disease and injury. Harmful use of alcohol causes harm on one hand, to the drinker through health impacts, such as alcohol dependence, liver cirrhosis, cancers and injuries. On the other hand, it harms others through dangerous actions of intoxicated people, such as drink–driving and violence; or through the impact of drinking on un-born child and child development, a problem called Fetal Alcohol Syndrome. Although alcohol is a legal commodity in many countries globally, it is associated with many serious social issues, including child neglect and abuse, and also absenteeism in the workplace.