28 November 2018 | BENI: A spike in malaria cases is threatening the health of people in parts of the eastern Democratic Republic of the Congo (DRC) where health workers are also battling an Ebola outbreak.  In response, a four-day mass drug administration (MDA) campaign was launched today in the Northern Kivu province town of Beni, with a target to reach up to 450 000 people with anti-malarial drugs combined with the distribution of insecticide-treated mosquito nets.

The malaria control campaign is being led by the DRC National Malaria Control Programme, supported by the World Health Organization (WHO), UNICEF, the Global Fund and the United States President's Malaria Initiative (PMI). The campaign is modelled after the campaign implemented in Sierra Leone during the 2014 Ebola outbreak in West Africa, which was instrumental in lowering illness and deaths from malaria in the areas reached.

“Controlling malaria is critical in areas like North Kivu, as it causes widespread disease and death, especially among the region’s children,” says Dr Yokouide Allarangar, WHO’s Representative to the DRC. “This anti-malaria campaign will also help reduce the pressure on the overall health system, which is currently striving to protect people from the ongoing Ebola threat in the region.”

North Kivu’s malaria outbreak has overburdened Ebola responders; many suspected cases of Ebola have turned out to be malaria, as early symptoms of both diseases are similar. Up to 50% of people screened in Ebola treatment centers have been found to only have malaria.

Secondly, the mass drug administration will treat people who have already contracted malaria and curtail transmission of malaria among Ebola-affected populations and health centres. Having fewer people present with malaria will lessen the workload  on already stretched Ebola treatment centres.

From 2016-2017, DRC observed an estimated increase of more than half a million malaria cases (24.4 million to 25 million), according to the WHO World malaria report 2018. DRC is the second-leading country in the world for malaria cases, after Nigeria, accounting for 11% of the 219 million cases and 435 000 deaths from malaria in 2017.

In North Kivu province, the area experiencing the brunt of the Ebola outbreak, there has already been an up to eight-fold increase in malaria incidence as of early September 2018 (or approximately 2000 cases registered per week) compared to the same period in 2017.

North Kivu province is the epicentre of an Ebola outbreak that was announced on 2 August and has caused more than 365 cases and 236 deaths. The town of Beni has been one of the most affected. Political instability, violence, and a refugee and internally-displaced people crisis have made the current Ebola outbreak one of the most complex and difficult public health challenges in recent history. 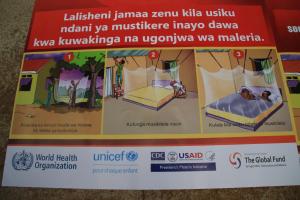 Malaria control campaign launched in Democratic Republic of the Congo to save lives and aid Ebola response
Credits
Click image to enlarge
For Additional Information or to Request Interviews, Please contact:
Eugene Kabambi