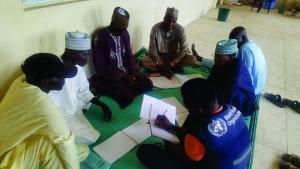 Compared to other states, Jigawa previously had relatively low levels of demand for vaccine uptake. To turn the situation around, the World Health Organization (WHO) supported Government to leverage on health ambassadors as part of the Community Engagement and Routine Immunization Intensification (CERII) project designed to get the local population more actively involved in improving their health.

The health ambassadors – called “Jakadan Lafiya” in Hausa – living in Jigawa State and act as focal points for all health matters in their catchment area.

“Health ambassadors record the names and immunization status of all children under 1 year in their area,” explains Dr Kabir Ibrahim, Executive Secretary of the Jigawa State PHC Development Agency. “After every immunization session at the health facility they update their registers and identify any children who have missed out on their routine vaccinations. By working with these health ambassadors in the community, we have been able to reach more children and reduced the number of unimmunized children.”

Measuring success, identifying challenges
Through the community engagement initiative, WHO supports Government to assess the role of the health ambassador initiative by providing regular assessments of the programme to measure successes, identify challenges and suggest areas for improvement. The aim is to ensure that community engagement activities are sustainable over the longer term because they have already produced such valuable results.

“WHO is monitoring the contributions of over 10,000 health ambassadors in Jigawa in strengthening community ownership for routine immunization”, says Ahmad Tambari, WHO Community Engagement Assistant

He states further that, “After the inception of the community engagement project in Jigawa, in January 2019 the results from the RI-Lots Quality Assurance Sampling (LQS) shows a slight increase in the quality of routine immunization in LGAs in Jigawa State. Furthermore, the number of LGAs with acceptable scores increased from 16/27 in Q4 of 2018 to 22/27 in Q2 of 2019. Community engagement strategy among other factors could have contributed to changing trajectory in routine immunization landscape in Jigawa State”

For optimal protection against polio, children are administered the oral polio vaccine at birth, at 6 weeks, at 10 weeks, and then at 14 weeks when they are also given one dose of the injectable inactivated polio vaccine (IPV).  Data shows that since the start of the scheme, dropout rate for Penta1 to Penta 3 has decreased from 8% to 6%.

The state is being supported by WHO to conduct RI intensification activities focusing on outreach sessions for communities that have low coverage. WHO led the implementation of the CERII project with funds from the Bill and Melinda Gates Foundation (BMGF). In addition to Jigawa State, WHO has provided technical and coordination support in seven other states: Gombe, Sokoto, Yobe, Kano, Kaduna, Borno and Bauchi.