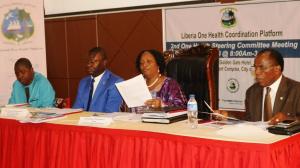 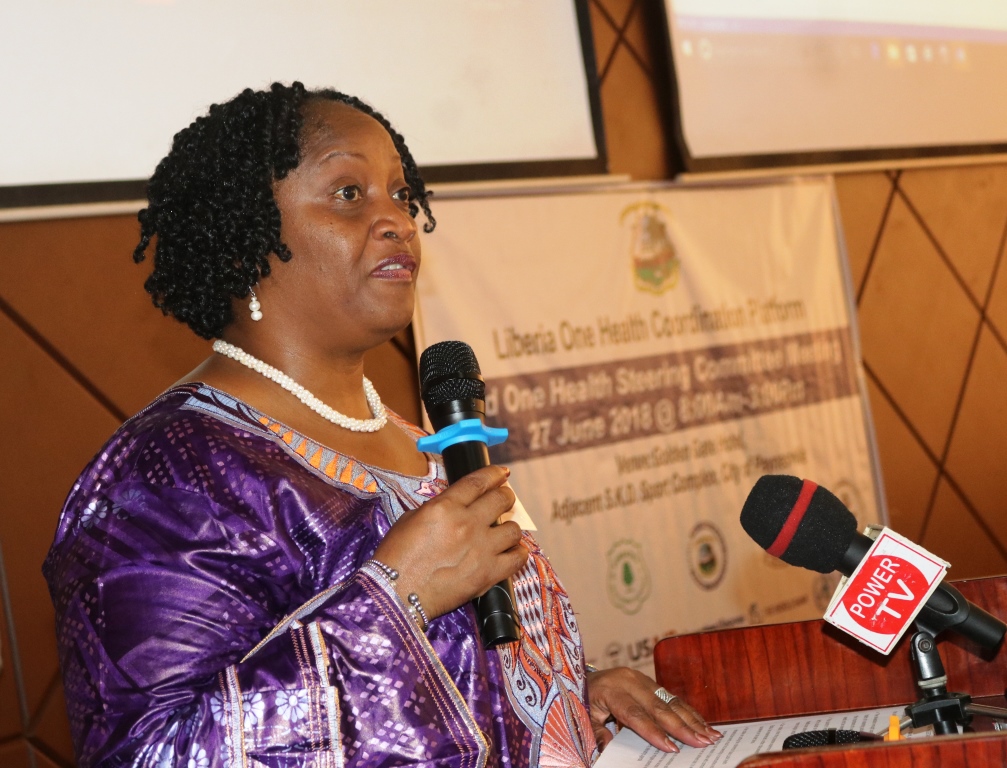 Monrovia, 27 June 2018: The Government of Liberia and partners have launched the National Action Plan for Health Security, the National Action Plan for Antimicrobial Resistance and the One Health Coordination Platform Governance Manual at the second national One Health Coordinating Platform meeting chaired by the Vice President of the Republic of Liberia, Mrs. Jewel Howard Taylor.
The One Health Platform is used to reduce the risk of new emerging pandemics through strengthening capacities to prevent, prepare for, detect, and respond to known and emerging public health threats due to the interface of humans, animals and the environment.  The One Health Platform is an international best practice endorsed by the WHO, FAO, and the Global Health Security Agenda partnership.
The launch of the three documents was an important milestone towards addressing emerging health threats and underscores national commitment to strengthen mechanisms for prevention, detection and response to public health threats due to the interface between humans, animals and environment.
The launch of the One Health approach in Liberia emerged from the experience of the 2014-2016 Ebola Virus Disease epidemic that give rise to the urgent need for a multi-sectoral coordinating mechanism for effective and prompt prevention, preparation, detection and response to public health threats.  As a result, the Joint External Evaluation (JEE) for International Health Regulations conducted in 2016 highlighted several gaps and recommended the urgent need to strengthen multi-sectorial coordination as a cost- effective way to better prepare for public health threats.
With support from World Health Organization (WHO), USAID, US-CDC and other partners, Liberia has made steady progress in institutionalizing the One Health approach and the establishment of a permanent One Health Coordinating Structure, the One Health Coordination Platform (OHCP), with the Vice President of the Country serving as the chairperson of the platform.
Given this development, Liberia embarked upon the developing of key essential documents to improve health security and these include; the National Action Plan for Health Security, the One Health Coordination Platform Governance Manual and the National Action Plan for Antimicrobial Resistance. These documents were therefore launched in a well-attended meeting chaired by the chairperson, Mrs. Jewel Howard Taylor, Vice President, Republic of Liberia.
Other senior Government officials in attendance were : Minister of Health, Dr. Wilhelmina Jallah; Minister of Agriculture, Mr. Morgana Flomo; Minister of Education Dr. Ansu Sonii; the Director General of the National Public Health Institute (NPHIL), Mr. Tolbert Nyenswah; and senior officials from the Ministry of Health, NPHIL, Environmental Protection Agency, Forestry Development Authority; as well as representatives from the Medical and Nursing Regulatory Authorities and  medical training institutions. Also present were representatives from international organizations and partners including:  WHO, USAID, US-CDC, World Bank, the United Nations Food and Agriculture Organization (FAO), Eco Health Alliance; Civil Society Organizations and members of the media.
In her remarks, the chairperson Mrs. Jewel Howard Taylor stated that “Without good health, a country is paralysed and that Liberia is making progress in the right direction with the development of these relevant documents that are about to be implemented. She further stated that the health sector needs to take cognizance of President George Weah common slogan which states that   “We want action now”.  She expressed gratitude to all partners who participated in the establishment of the One Health Coordinating Platform and the development of the various plans to strengthen the One Health Approach.
She further requested all stakeholders to actively participate and support the implementation of the various plans; emphasizing that the healthcare system should be aligned with the Pro-poor Agenda of the government.  She assured the audience of the government’s commitment in making health a national priority of the Government.
Making remarks also, the Director General of the NPHIL, Mr. Tolbert Nyenswah expressed gratitude to the WHO, World Bank, US-CDC, FAO, USAID and all partners for their continuous support to the establishment of the One Health Coordinating Platform in Liberia, and   improvement in the health care delivery system. He quoted the  former Minister of Agriculture that “Healthy people begin with healthy animals”, and further stated that “If we can coordinate better the One-Health Initiative, Liberia will be one of the countries at the forefront of global health security”.
Dr. April Baller, WHO Liberia Emergency Preparedness and Response Officer, making remarks on behalf of the WHO Country Representative, commended the stewardship and leadership role provided by the Office of the Vice President in bringing together stakeholders to achieve this historic milestone. She further commended Liberia on the steady progress made in improving the healthcare delivery system since the Ebola epidemic. She concluded by reaffirming WHO’s commitment of providing both technical and financial support to ensure the full implementation of the various plans.
In his remarks, Dr. Desmond Williams, US-CDC Country Representative said public health hazards affect the economy and social improvement of any country making specific reference to the 2014-2016 EVD outbreak in Liberia, Guinea and Sierra Leone.  He reassured his institution’s continued collaboration with the Ministry of Health and partners to promote health through the implementation of the One Health approach.
In brief remarks, USAID Senior Health Advisor, Mrs. Monica Dea said, USAID will continue to support the Government of Liberia (Ministry of Health), in strengthening its capacity to prevent, detect, and response to public health threats.
For his part, Mr. Abebe W. Wolde, FAO Emergency Center for Transboundary Animal Disease (ECTAD) Team Lead in Liberia , said that over sixty percent of emerging and re-emerging diseases have their origins in animals and humans are at increased risk of contracting diseases of animal origin because of a wide range of their consistent interactions. He called for increased government support to the agriculture sector to enhance its operations, under the One-Health Approach.
Other Ministers and some development partners at launch pledged to closely collaborate with government and other stakeholders to ensure successful implementation of the One Health Platform in Liberia. 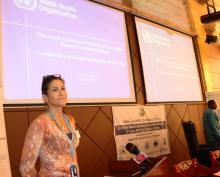