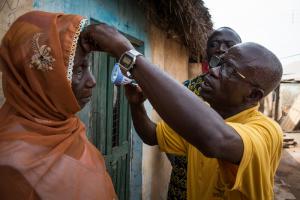 13 June 2018 ¦ Brazzaville ¦ Accra ¦ Geneva - The World Health Organization (WHO) today congratulated Ghana for having eliminated trachoma as a public health problem, two decades after the World Health Assembly resolved to tackle the leading infectious cause of blindness. The announcement comes the day after a commitment from Pfizer, the manufacturer of Zithromax (azithromycin) to extend their donation programme for the antibiotic until 2025, if required, to finish the task of global trachoma elimination.

“It’s been 20 years since the global health community committed to eliminating trachoma worldwide” said WHO Director-General, Dr Tedros Adhanom Ghebreyesus. “Although there’s more work to do elsewhere, the validation of elimination in Ghana allows another previously heavily-endemic country to celebrate significant success.”

Ghana is the first country in WHO’s African Region to achieve this milestone.

“This success is a result of a tremendous amount of hard work by thousands of health, education and development workers to improve the lives of individuals with trachoma and their families”, said Mr Kwaku Agyemang-Manu, Ghana’s Minister of Health. “The Government of Ghana is enormously grateful to its staff and to the many partners1 that have joined forces with us to eliminate trachoma and the cycle of poverty it triggers.”

The global trachoma community learnt a lot from Ghana’s experience. Innovations pioneered there include the use of height-based dosing for azithromycin; systematic active case-searches for trichiasis involving door-to-door, community-by-community fieldwork; and, intensive counselling of patients found to have trichiasis with an offer of immediate surgery, which produced considerable improvement in surgical uptake.

“Success in Ghana is a result of the strong leadership at all levels, implementation of the full SAFE strategy right from the outset, strong collaboration between Ghana Health Service and its many partners, and integration at lower levels of programme delivery, including community ownership,” said Dr Matshidiso Moeti, WHO Regional Director for Africa. “Hearty congratulations are deserved for this achievement.”

Trachoma was identified in the 1950s as the most important cause of blindness in Ghana. By the 1990s, the disease was known to persist as a significant public health problem in the Northern and Upper West Regions. There were about 2.8 million people at risk of trachomatous blindness nationally, with an estimated 13 000 people suffering from trichiasis. In 2000, the Ministry of Health and Ghana Health Service set up a national Trachoma Elimination Programme.

Trichiasis surgery was provided at no cost, a critical Ghana Health Service decision reflecting the socioeconomic disadvantage of people with trichiasis and the impact of the condition on future earning potential.

Azithromycin, donated by Pfizer through the International Trachoma Initiative, was distributed with support from FHI 360 (using funds from the United States Agency for International Development), The Carter Center, Sightsavers and other organizations.

Trachoma, a devastating eye disease caused by infection with the bacterium Chlamydia trachomatis, is spread through contact with infective eye or nose discharges, either directly from person to person, or mediated by flies. Active (inflammatory) trachoma occurs as a result of infection, and is common among preschool-aged children. Women are blinded up to four times as often as men, mainly due to their close contact with infected children.
Transmission is associated with poor sanitation and hygiene, which increase the availability of eye discharges and encourage the breeding of flies.

In 1996, WHO launched the WHO Alliance for the Global Elimination of Trachoma by the year 2020 (GET2020). With other partners in the Alliance, WHO supports country implementation of the SAFE strategy and strengthening of national capacity through epidemiological assessment, monitoring, surveillance, project evaluation and resource mobilization. Elimination of trachoma is inexpensive, simple and extremely cost effective, yielding a high rate of net economic return.