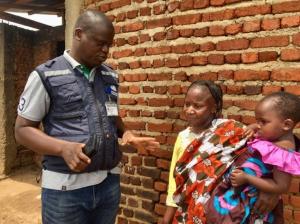 Beni, 10 March 2020 – The observation period of the last people to have come in contact with an Ebola patient in the Democratic Republic of Congo has ended, another significant step in the efforts to end the outbreak. The 21-day follow-up for the 46 contacts elapsed on 10 March.

The majority of the contacts were monitored in their homes in the north-eastern Beni town. They had all been in contact with the last Ebola patient to test negative for the virus for a second time on 1 March, and who was subsequently discharged from a treatment centre. Eleven of her family members, considered high-risk contacts, had chosen to stay at a voluntary isolation site run by the World Health Organization and the DRC Ministry of Health until the end of the incubation period. They all returned home together.

During celebrations to mark their release from the isolation site, the mayor of Beni, Jean-Edmond Bwanakawa Nyonyi, reminded people to stay vigilant until the end of the outbreak was declared by the Ministry of Health.

Although no new cases have been reported, Ebola response operations remain in full force. Critical ongoing activities include validating alerts, testing suspected cases and confirming the cause of death of people who pass away in communities.

The Ebola response teams remain in place to quickly respond to any flare-up which may occur. Given the long duration and the magnitude of the Ebola outbreak in North Kivu, South Kivu and Ituri provinces, there is a risk of re-emergence of the virus in the lead up to the declaration of the end of the outbreak, and for several months following that declaration.

Even with robust surveillance systems, transmission of Ebola virus outside of groups under surveillance can never be definitively excluded. Ebola virus may persist in the body fluids of some survivors of the disease for a long time. The virus may persist in used injectable equipment (infected needles, syringes or vials) for several weeks. Ebola exists in an animal reservoir in the Ebola-affected region of the DRC, and there is always a risk of a new spillover.

It is the role of the DRC Ministry of Health to make the official declaration of the end of the epidemic. The World Health Organization has provided technical guidance suggesting that, if no other cases are confirmed, the current Ebola outbreak should be declared over after two 21-day incubation periods have passed, starting after the last Ebola patient tests negative for the second time.