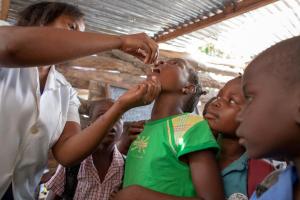 10 April 2019, Maputo - The Ministry of Health in Mozambique has concluded a successful six-day emergency cholera vaccination campaign that reached more than 800 000 people in four districts affected by Cyclone Idai.

The campaign was supported by around 1200 community volunteers and partners including the World Health Organization (WHO), UNICEF, Médecins Sans Frontières (MSF), International Federation of the Red Cross and Red Crescent Societies (IFRC) and Save the Children.

“From start to finish, this campaign was one of the fastest ever, thanks to experienced people at the Ministry of Health, who knew there was a high risk of a cholera outbreak and made a rapid request for the vaccines as soon as the cyclone hit,” says Dr Djamila Cabral, Head of the WHO office in Mozambique. “The Ministry did an excellent job organizing the campaign and reaching so many people in such a short time. The oral cholera vaccine is one of the vital measures that can help save lives and stop the spread of this terrible disease during an outbreak.”

The oral cholera vaccines, donated by Gavi from the Global Cholera Vaccine Stockpile, arrived in Beira on Tuesday 2 April and, within 24 hours, began reaching people in need.

The vaccines were given to communities identified by the Government at highest risk – those without access to safe water and sanitation - in Beira, Dondo, Nhamatanda and Buzi districts.

Vaccine uptake has been very high and the campaign has been well received by the communities. Remaining vaccines will be used for other at-risk communities that were not reached by the initial campaign.

“Controlling cholera in these areas will reduce the risk to the rest of the population because fewer people will be taking it back and forth into the wider community,” says WHO cholera vaccination expert, Kate Alberti, who was deployed to Beira to support the Ministry of Health to organize the campaign.

Dr Nazira Abdula, Minister of Health of Mozambique, acknowledged the great support of WHO and partners for the vaccination campaign. “It’s very difficult to roll out a campaign of this scope in only three days,” she says.

WHO’s Dr Cabral adds: “This campaign would not have been possible without the strong engagement of the local authorities and the communities themselves. The number of volunteers is impressive and, wherever they go, there has been very strong uptake of the vaccine. Everyone is very keen to make this a success to stop cholera in its tracks.”

Since Cyclone Idai struck Mozambique on 14 March, hundreds of thousands of people have been living in temporary settlements without access to safe water and sanitation. The Ministry of Health declared a cholera outbreak on 27 March and, as of 8 April, had reported more than 3577 cases and 6 deaths.

The cholera vaccine is just one tool for the outbreak response. Currently 12 cholera treatment centres, with 500-bed capacity, have been set up by the national authorities and international partners to serve the affected communities. Partners are also supporting the local authorities to provide access to safe water and sanitation in settlements and communities across Sofala Province.

Cholera is endemic in several parts of Sofala province and the cholera outbreak that developed post-Cyclone Idai acts as a reminder that sustainable access to safe water, sanitation, and hygiene (WASH) is the long-term solution to controlling cholera. Acknowledging that every case of cholera is preventable, the Global Task Force on Cholera Control is implementing a Cholera Global Roadmap to 2030, which calls upon development partners and donors to support countries to reduce cholera deaths by 90% by 2030.