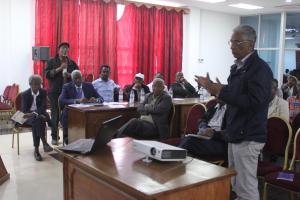 WHO jointly with MOH had conducted a research dissemination workshop on 30 September 2019 at Orotta hospital conference hall.

Traditional Medicine has been an important part of the culture and tradition of Eritrean people for centuries. Depending on their areas of localities, they are influenced by their various cultural backgrounds and religious inclinations, and they have been able to develop a wide variety of traditional medical practices. This culture has enabled the society to promote health, to guard against illnesses and to cure diseases. However, these practices have been handed over from one generation to the other mostly via oral traditions with no systemic means of documentation which is a great concern for the loss traditional knowledge. As that is the case with most African countries, despite the accessibility of modern medicine to the majority of the Eritrean population, traditional medicine is still believed to be widely accepted and practiced, possibly because of their  accessibility, affordability, and acceptability to the local society.

As mentioned above, the research dissemination workshop, a survey report of knowledge Attitude and Practice (KAP) studies on traditional medicine practitioners, healthcare professionals, and the community was conducted in two Zobas (Gash Barka and Debub), and a KAP of traditional cauterization among patients visiting Massawa hospital were presented.

Moreover, findings of the surveys on the exposure of children to traditional medicine practices was taken as a concern. Uvulectomy, cautery and circumcision are the most widely practiced traditional medicine activities. These findings have however, brought information for the regulatory body to take evidence-based decisions to better the practices of community regarding healthcare.

As highlighted by the Director of National Medicine and Food Administration, the Traditioal Medicine policy document should be supported by legal ground for efficient regulation of the three components of traditional medicine (namely the product, practice and practitioners); finalization of the legal framework, code of ethics and practice are the next priority action points to be dealt with.