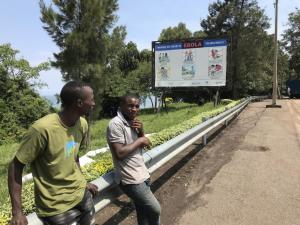 Rwanda and the Democratic Republic of Congo (DRC) are from their common border standpoint only 930 km apart. When a first Ebola Virus Disease (EVD) outbreak was declared on 1st August 2018 in the North Kivu Province of DRC, the Rwanda Ministry of Health, health partners and WHO engaged into systematic preparedness, response and training activities. They proved to be successful, as the highly contagious disease never crossed the Rwandan border. On 11th June 2019, the Uganda Ministry of Health declared an EVD outbreak in the Kasese District, in western part of the country. The recent outbreak in Uganda comes in the wake of a deadly outbreak in DRC's provinces of North Kivu and Ituri, which has persisted for 10 months.

Despite the fact that Rwanda is surrounded by this public health threat, no Ebola case has been reported yet in the country. The Rwandan Ministry of Health in collaboration with health partners and WHO recently organized training in EVD Surveillance, Infection Prevention and Control (IPC) and Case Management for frontline health facility worker in Musanze in the Northern Province of Rwanda. A mental health and psychosocial support cascade training was also provided at the Rugerego Ebola Treatment Center from 22-28 June 2019 in Rubavu, a District in Western Province of the country with capital Gisenyi.

The IPC training targeted high-risk zones susceptible of seeing a case of Ebola, either due to their proximity to borders with DRC and Uganda or due to closeness to road and air networks. The initial trainings covered nine high-risk Districts and their hospitals: Kibagabaga , Muhima, Masaka, Nyamata. The second training targeted from the following Hospitals: Nyanza, Mugonero, Kirinda, Shyira, Kibagabaga combined with Kacyiru hospital located in Kigali.

Real case investigation were distributed to the trainees in order for them to master EVD pre-epidemic Case Management definition (Alert, Suspect or Probable). They revised the decision-making flowchart, reviewed Standard Operation Procedures (SOPs) designed to differentiate suspect cases from confirmed cases. They revised SOPs about when to transfer safely a suspect case from the screening stage, to the isolation unit and when to notify Public Health authorities. The overall exercise enabled the trainees to understand the various role and responsibilities of Rwandan District Hospitals in case of an Ebola outbreak in the country. Using real case scenarios, cross-examination and tests to assess where the individual knowledge was vulnerable, scaled up individual assertiveness in terms of taking timely decision-making and identifying accurately the different stages of an Ebola case.

The projection of a video with vivid details on the development of a confirmed EVD case via a child living in a rural area demonstrated how some caring social and compassionate traditional mechanisms were contributing to spread the disease to a whole community. Another culturally sensitive aspect reviewed was the importance of proper dignified burial to avoid spreading via harmful and unsafe traditions.

Mental health is also another human face of an EVD intervention. Ebola’s first devastating effect being to create panic. If communities are not taken in charge and mentally supported, resistance to governments’ initiatives might occur, along with a loss of trust, denial and rumour spreading, mental distress. As people affected by Ebola are subjected to rejection, communities have to be part of EVD preparedness and response. The psychosocial workers are trained to provide this complex support system.

In total 153 Health Workers were trained in the country, 60 of which were trained on how to perform in an Ebola Treatment Center. The psychological first aid guidelines developed by WHO during the first outbreak in DRC in 2018 was adapted to the case of Rwanda. The more recent confirmed case of EVD in Goma on 14 July 2019, a city located less than 8 km from Gisenyi across the Rwandan border proved that so far, the Rwandan health authorities, health partners and WHO have timely prepared health personnel 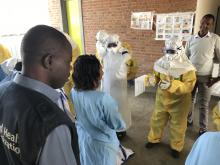 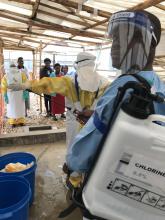 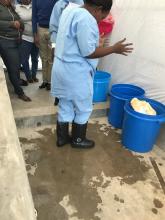 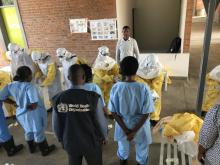