Confirmation of case of ebola virus disease in Uganda 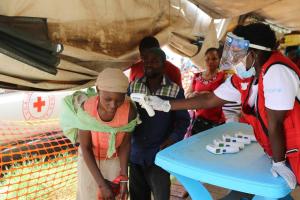 Confirmation of case of ebola virus disease in Uganda

Kampala, 11 June 2019 - The Ministry of Health and the World Health Organization (WHO) have confirmed a case of Ebola Virus Disease in Uganda. Although there have been numerous previous alerts, this is the first confirmed case in Uganda during the Ebola outbreak on-going in neighbouring Democratic Republic of the Congo.

The confirmed case is a 5-year-old child from the Democratic Republic of the Congo who travelled with his family on 9th June 2019. The child and his family entered the country through Bwera Border post and sought medical care at Kagando hospital where health workers identified Ebola as a possible cause of illness. The child was transferred to Bwera Ebola Treatment Unit for management. The confirmation was made today by the Uganda Virus Institute (UVRI). The child is under care and receiving supportive treatment at Bwera ETU, and contacts are being monitored.

The Ministry of Health and WHO have dispatched a Rapid Response Team to Kasese to identify other people who may be at risk, and ensure they are monitored and provided with care if they also become ill. Uganda has previous experience managing Ebola outbreaks. In preparation for a possible imported case during the current outbreak in DRC, Uganda has vaccinated nearly 4700 health workers in 165 health facilities (including in the facility where the child is being cared for); disease monitoring has been intensified; and health workers trained on recognizing symptoms of the disease. Ebola Treatment Units are in place.

In response to this case, the Ministry is intensifying community education, psychosocial support and will undertake vaccination for those who have come into contact with the patient and at-risk health workers who were not previously vaccinated.

Ebola virus disease is a severe illness that is spread through contact with the body fluids of a person sick with the disease (fluids such as vomit, feces or blood). First symptoms are similar to other diseases and thus require vigilant health and community workers, especially in areas where there is Ebola transmission, to help make diagnosis. Symptoms can be sudden and include:

People who have been in contact with someone with the disease are offered vaccine and asked to monitor their health for 21 days to ensure they do not become ill as well.

The investigational vaccine being used in DRC and by health and frontline workers in Uganda has so far been effective in protecting people from developing the disease, and has helped those who do develop the disease to have a better chance of survival. The Ministry strongly urges those who are identified as contacts to take this protective measure.

Investigational therapeutics and advanced supportive care, along with patients seeking care early once they have symptoms, increase chances of survival.

The Ministry of Health has taken the following actions to contain spread of the disease in the country:

There are no confirmed cases in any other parts of the country.

The Ministry is working with international partners coordinated by the World Health Organization.