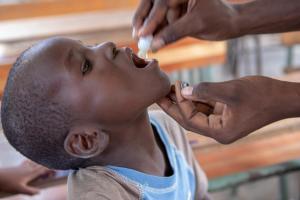 Thousands of people received the oral cholera vaccine today as part of a six-day emergency vaccination campaign run by the Ministry of Health in Mozambique to help prevent spread of cholera.

At the 7 de Abril Primary School in Inhamayabwe village, near the town of Dondo, excited school children gather in their classrooms, pushing one another to the front of the crowded room where each child receives their dose.

Amelia Mateos, a preventive medicine technician, is leading the campaign at this vaccination station – one of 73 vaccination points in Dondo district. As each child comes forward, she takes a small glass vial from the tray, inspects it and shakes it vigorously before removing the cap. She gently tilts the child’s head back and, with one hand on their chin, encourages them to open their mouth wide. She shakes the vial of 1.5ml liquid vaccine into the child’s mouth and, with a gentle pat on their head, sends them off into the bright daylight outside the classroom.

“Don’t spit it out,” she says to one small boy who is scrunching up his face in disgust. It may not taste very nice but this vaccine will protect these children from something much worse - the horrible and sometimes deadly diarrhoeal disease cholera.

José, a volunteer, is marking a cross on a paper sheet to keep track of the number of vaccines given. More than 1200 volunteers are supporting the Ministry of Health and partners for this rapid campaign. Each vaccination team is led by a health worker, and three others to support with preparing the vaccine vials, tallying the vaccines given and marking the fingernails of those already vaccinated.

“We are doing this campaign because cholera is a major public health threat,” says Amelia. “Since we started at 7am, we have already vaccinated 1300 children at this school.”

Since Cyclone Idai struck Mozambique on 14 March, hundreds of thousands of people have been living in temporary settlements without access to safe water and sanitation. The Ministry of Health declared a cholera outbreak on 27 March and, as of 5 April, had reported more than 2430 cases and 3 deaths.

On 2 April, almost 900 000 doses of oral cholera vaccine arrived in Beira. They were donated from the global cholera vaccine stockpile which is funded by Gavi. The campaign, also funded by Gavi, is being run by the Mozambique Ministry of Health with support from WHO, UNICEF, Médecins Sans Frontières (MSF), International Federation of the Red Cross and Red Crescent Societies (IFRC) and Save the Children.

Within less than 24 hours of arrival in Beira, the first people had started receiving the vaccines.

On a visit to Beira, Dr Nazira Abdula, Minister of Health of Mozambique met with WHO and other partners and acknowledged the great support for the oral vaccination campaign. “It’s very difficult to roll out a campaign of this scope in only three days,” she says.

Dr Djamila Cabral, Head of the WHO office in Mozambique, says: “This campaign would not have been possible without the strong engagement of the local authorities and the communities themselves. The number of volunteers is impressive and, wherever they go, there has been very strong uptake of the vaccine. Everyone is very keen to make this a success to stop cholera in its tracks.”

The vaccines are being given to populations identified by the Government at highest risk – those without access to safe water and sanitation - in Beira, Dondo, Nhamatanda and Buzi. “Controlling cholera in these areas will reduce the risk to the rest of the population because fewer people will be taking it back and forth into the wider community,” says WHO cholera vaccination expert Kate Alberti.

About a week after receiving the vaccine, the vaccinated person develops protection against cholera. A single dose will protect for about 6 months.

Maria Judith is a medical doctor who works in maternal and child health at Dondo Health Centre. She is in charge of the vaccination station here, one of 15 fixed points in Dondo. In addition to these fixed stations, there are almost 60 mobile vaccination units that will move around the district, and there are plans to go door-to-door at the end of the campaign to ensure full coverage. In total, the local health authorities have mobilized more than 340 teams for this campaign.

“Cholera is a disease that is spread by lack of sanitation,” says Erica, who is a student in 8th grade at Macharote Secondary School in Dondo. Erica is one of thousands of high school students who were vaccinated today. She shows the black mark on her fingernail to indicate that she has received the vaccine.

“You should wash your hands, particularly after going to the toilet, don’t keep rubbish lying around and avoid dirty water.”