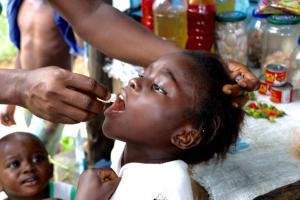 Gavi, the Vaccine Alliance, WHO and partners delivered 915,005 doses of Oral Cholera Vaccine to the country last week.

The Government of Nigeria, supported by WHO and partners, plan to vaccinate everyone over the age of one in these areas—more than 915 000 people—over the next few days. The campaign will take place in Muna internally displaced persons (IDPs) camp in Maiduguri as well as Jere, Monguno and Dikwa local government areas (LGAs).

"The Federal Government of Nigeria through the Nigeria Centre for Disease Control (NCDC) and the National Primary Health Care Development Agency (NPHCDA) in collaboration with the WHO, UNICEF and other partners are all supporting the Borno State Ministry of Health in leaving no stone unturned to ensure that the current cholera outbreak in some parts of Borno state is contained shortly,” said NCDC Chief Executive Officer Dr. Chikwe Ihekweazu. “The Government at all levels is working closely with partners to improve the sanitation situation, conducting hygiene promotion and disinfection of the affected areas including Muna, Custom house, Monguno and Farm centre IDPs camp, Dikwa, Konduga, Jere LGAs and Maiduguri Municipal Council.”

Following heavy rainfall and lack of access to safe water, more than 2600 suspected cholera cases have been reported, as of 16 September, in Borno state with more than 40 deaths since the first case was confirmed in mid-August. The majority of cases have been detected in the Muna IDP camp on the outskirts of Borno state’s capital Maiduguri, which houses 20,000 people who have fled the Boko Haram conflict. The number of suspected cholera cases has also increased dramatically in Dikwa and Monguno areas in the past few weeks.

The decision to send cholera vaccines from the global stockpile was taken on 7 September by the International Coordinating Group (ICG) for Vaccine Provision.

“Thousands of people in these camps have already left their homes to flee violence and terror. They now find themselves at risk of cholera,” said Dr Seth Berkley, CEO of Gavi, the Vaccine Alliance. ”These lifesaving vaccines will play a vital role in slowing the spread of the disease, buying valuable time to put the right water, sanitation and hygiene infrastructure in place to stop the root causes of this outbreak,” he added.

“WHO and partners are already making a difference by alerting people of the risks of cholera, supporting the early detection of cases, treating cases and taking other steps to end the outbreak,” said Dr Wondi Alemu, WHO Representative in Nigeria. “We are focusing on delivering a single dose to vaccinate as many people as quickly as possible. As we proceed with this vaccination campaign, we hope to contain this outbreak, and support the collective commitment by partners from the health sector and other sectors to help people in Borno state. Then we can move forward with addressing the myriad of other pressing health needs in Borno.”

Gavi, WHO and partners are working with the NCDC and Borno State Ministry of Health to make the vaccine available free-of-cost to affected populations, while supporting ongoing cholera prevention and preparedness.

Gavi, the Vaccine Alliance is a public-private partnership committed to saving children's lives and protecting people's health by increasing equitable use of vaccines in lower-income countries. The Vaccine Alliance brings together developing country and donor governments, the World Health Organization, UNICEF, the World Bank, the vaccine industry, technical agencies, civil society, the Bill & Melinda Gates Foundation and other private sector partners. Gavi uses innovative finance mechanisms, including co-financing by recipient countries, to secure sustainable funding and adequate supply of quality vaccines. Since 2000, Gavi has contributed to the immunisation of nearly 640 million children and the prevention of more than 9 million future deaths. Learn more at www.gavi.org and connect with us on Facebook and Twitter.

The World Health Organization (WHO) is building a better future for people everywhere. Health lays the foundation for vibrant and productive communities, stronger economies, safer nations and a better world. As the lead health authority within the United Nations (UN) system, we help ensure the safety of the air we breathe, the food we eat, the water we drink and the medicines and vaccines that treat and protect us and keep the world safe from public health threats of outbreaks and emergencies. The Organization aims to provide every child, woman and man with the best chance to lead a healthier, longer life. For more information about WHO visit www.afro.who.int or Facebook and Twitter (@WHOAFRO and @WHO)