Call for behaviour change in antibiotic use and prescription 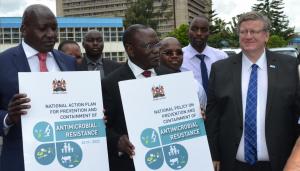 Call for behaviour change in antibiotic use and prescription

Kenya commemorated the World Anti-biotic Awareness Week on November 13-19 with a call for urgent action to avert antibiotic resistance which is leading to ineffective treatment of a growing number of infections.

Speaking at the event held at Kenyatta National Hospital, Nairobi, speakers representing the Ministry of Health, Ministry of Agriculture, Livestock and Fisheries, WHO and other partners,  emphasized the threat of antibiotic resistance and pressed for key actions to ensure antimicrobial resistance is dealt with firmly among human, livestock and crops.

Cabinet Secretary Dr Cleopa Mailu said antibiotic resistance was one of the biggest threats to global public health, food security, and development. He said Kenya was no exception to the threat and that increasing rates of antimicrobial resistance was being reported in local hospitals and communities. He said research had demonstrated that a continued rise in antimicrobial resistance globally would lead to 10 million people dying every year and a 3% reduction in Gross Domestic Product (GDP) by the year 2050.

The Ministry of Health and the Ministry of Agriculture, Livestock, & Fisheries had embarked on a process to consolidate efforts to implement sustainable measures to mitigate any further emergence and spread of Antimicrobial Resistance (AMR), he added.
Using One-Health approach, the Ministries had jointly developed the Antimicrobial Resistance Policy and National Action Plan and purpose to continue with this approach into the future.

He said the policy aimed at “reducing the burden of AMR and promote prudent use of antimicrobial agents to ensure that there is continued successful treatment and prevention of microbial diseases by ensuring that effective, quality and safe antimicrobials are accessible to all who need them”.

The 2017 World Antibiotic Awareness Week brought various players together and was intended to enhance public awareness of the increasing threat of antibiotic resistance. The key call:  ‘Seek Advice from a qualified professional before taking antibiotics’.

Dr Mailu and the team marked the day by launching the National Action Plan for Prevention and Containment of Anti-microbial resistance. The event was also addressed by WHO representative, Dr Rudi Eggers, who said a growing number of infections such as pneumonia, tuberculosis, gonorrhoea, and salmonellosis, were becoming harder to treat as the antibiotics used to treat them had become less effective.

“Bacteria, not humans or animals, become antibiotic resistant and may infect humans and animals, with infections harder to treat than those caused by non-resistant bacteria,” he added. “Antibiotic resistance lead to longer hospital stays higher medical costs and increased mortality.” He called for behavior change which would include actions like vaccination, hand-washing, practicing safer sex and good food hygiene. “The world urgently needs to change the way it prescribes and uses antibiotics. Even if new medicines are developed, without behaviour change, antibiotic resistance will remain a major threat.” He said.

He hailed Kenya for successfully developing the Policy and National Action Plan (NAP) on the prevention and containment of AMR. He said adapting the NAP to the context of devolution and the specific governance arrangements in all sectors had helped to ensure that these policy documents were aligned to the country context. He said Kenya needed to prioritize three critical areas, namely:

He also outlined actions by all players to ensure reduction of AMR. These include actions by individuals, policy makers, health professionals and the agricultural sector.

He also outlined actions by all players to ensure reduction of AMR. These include actions by individuals, policy makers, health professionals and the agricultural sector.

For the agriculture sector

The meeting was also attended and addressed by representatives from veterinary services, Kenya fisheries service, Food and Agricultural Organization, FAO.

Dr Mailu and the team marked the day by launching the National Action Plan (NAP) for Prevention and Containment of Anti-microbial resistance. 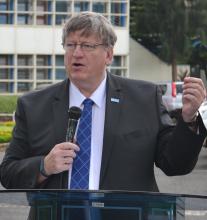 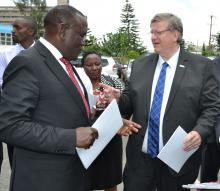