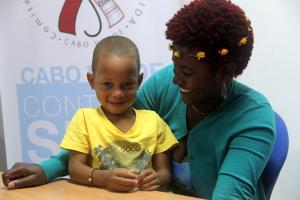 Emanuel Fernandes was born a few weeks after his mother discovered she was HIV positive.

“I was so shocked, I cried a lot—I was not expecting it,” recalls Leila Rodrigues of the routine antenatal check-up test that had detected the virus.

Ms Rodrigues lives in Praia City, Cabo Verde and remembers the hospital staff jumping into action. Most critically, she was given a course of antiretroviral (ARV) treatment to prevent the transmission of HIV to her baby.

After a Caesarean birth and 18 months of paediatric ARV treatment and supervision, Emanuel tested negative. “When they gave the news, I was so glad—it was the happiest day in my life,” she exclaims.

Cabo Verde has prioritized the elimination of HIV transmission from mother to child because, as Minister of Health Arlindo Nascimento do Rosário says emphatically, “Every child has a right to be born healthy and to live a healthy life. They are born to shine.”

The country has decentralized HIV services and offers HIV testing to all pregnant women. If a woman is found to be positive, she is immediately provided antiretroviral drugs, which along with a package of services during labour, delivery and breast-feeding reduces the risk of transmission of the virus to their children to less than 5%. The Cabo Verde health system provides these services for free as part of the government’s universal health coverage policy.

Community work and individual visits are at the core of the Coordination Commission to Fight AIDS (CCS-Sida) programme of “social assistants” in the prevention of HIV infection and support for people who live with HIV or AIDS.

“The proximity work is critical to help families and provide the information needed for the mums to have a good quality of life and avoid stigma and social marginalization,” says Augusta Fernandes, the social assistant whose 50 “clients” included the mother of Emanuel Fernandes.

“In 2014, 2015 and 2016, we had zero infected babies,” notes Celina Ferreira, CCS-Sida President in Cabo Verde. There was one case in 2017, but she says it was an anomaly “because the treatment was not followed due to family problems related to drug consumption.”

With support from the World Health Organization (WHO) and partners, Cabo Verde is leading the way in West and Central Africa on the elimination of the HIV in children born to HIV-positive mothers.

Many countries lagging in prevention of mother-to-child transmission

Many other countries in the region have yet to reach the same level of success as Cabo Verde.

Fewer than half of all pregnant women living with HIV in West and Central (47%) had access to antiretroviral medicine to prevent transmission of the virus to their child, compared with almost 90% in East and Southern Africa.

Although there has been some progress in antiretroviral therapy coverage for children in West and Central Africa, which rose from 18% in 2014 to 26% in 2017, the region still has the lowest coverage in the world.

To help countries catch up to global advances, UNAIDS, UNICEF and WHO are using the High-Level Meeting on the Elimination of Mother-to-Child Transmission of HIV and Universal Health Coverage of Paediatric HIV Testing and Treatment in West and Central Africa this week in Dakar, Senegal to urge countries to step up their response to paediatric HIV.

“WHO is providing crucial seed funding and expert support to assist countries in transforming their HIV response into sustainable, efficient and responsive programmes,” points out Dr Hugues Lago, Coordinator of the HIV/Tuberculosis/ Hepatitis Programme in the WHO Regional Office for Africa. “We are supporting more than 20 countries in West and Central Africa to further decentralize HIV services and reach the 90-90-90 global  targets .”

Inadequate laboratory systems remain a major impediment. Only 21% of infants exposed to HIV in the region are tested for the virus within the first two months of life. Early infant diagnosis is crucial for ensuring life-saving treatment as quickly as possible.

WHO is helping countries integrate and decentralize their HIV programmes into their broader health services and to build the capacity of national teams to scale up early infant diagnosis. Providing HIV testing and treatment at antenatal, immunization and malnutrition clinics as well as during campaigns for the distribution of bednets to combat malaria can help increase the number of infants who are diagnosed early.

Emanuel Fernandes is a testament to the success of programmes to prevent the transmission of HIV from mother to child. He is now a healthy 4-year-old boy about to start primary school and his mother has become an activist helping other HIV-positive women as a member of the National Network of People with HIV of Cabo Verde.

“I want my kid to be a great man, humble with a big heart to help others,” wishes his mother.