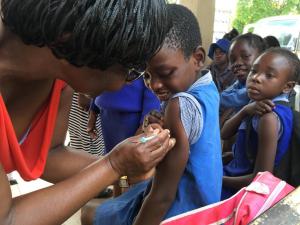 It was the third day of the first-ever vaccination campaign in Africa against typhoid fever. Twenty-seven-year-old Sarah Nyamande was one of many mothers lining up in the unique outreach post – a shopping mall in a Harare suburb. Health officials were offering children and others vulnerable to the disease what promises to be a new layer of protection, especially for families living in conditions of unsafe water and sanitation.

Everything about this campaign was unique.

“Zimbabwe is the first country in Africa to benefit from the mass typhoid vaccination, which has been proven safe and effective,” says WHO Country Representative Dr Alex Gasasira of the campaign that ends today.

First, the Typbar-typhoid conjugate vaccine against typhoid is new, and, unlike the routine typhoid immunization, it has proven safe for children younger than 2 years (but older than 6 months).

In addition, Zimbabwe is the first country in Africa to have the vaccine and to have used it in the continent’s first-ever mass typhoid vaccination campaign as well as one that was launched in response to an outbreak situation.

“We noted with concern that typhoid cases in Harare had been on the increase, with the peak reached in December 2018,” explains Dr Obadiah Moyo, Minister of Health and Child Care. “In order to prevent further spread of typhoid, we decided to introduce the typhoid conjugate vaccine in high-risk areas while at the same time promoting water provision, sanitation and good hygiene.”

The eight-day campaign took place in nine high-density Harare suburbs from25 February to 4 March. The Zimbabwe Government, through the Ministry of Health and Child Care and in collaboration with WHO, Gavi, the Vaccine Alliance and other partners, had planned to vaccinate 370 000 people, mostly children and adolescents, and had reached 73% of the targeted population in the first six days of the campaign

“The introduction of the typhoid vaccine will help reduce the number of cases in the city and reduce the spread of resistant typhoid strains,” says City of Harare Director of Health Services Dr Clemence Duri.

Typhoid fever, caused by a bacteria called Salmonella Typhi that is spread through contaminated food and water and poor sanitation, is endemic in Harare. But seasonal outbreaks have been occurring every year since 2010. In the recent surge, more than 1 682 suspected and 39 confirmed typhoid fever cases were reported in the capital city between September 2018 and mid-January of this year.

WHO recommends the introduction of the Typbar-typhoid conjugate vaccine to be prioritized in countries with the highest burden of typhoid disease or a high burden of antimicrobial-resistant strain. Unfortunately, Zimbabwe meets the two criteria. In addition to the seasonal outbreak, the country has been experiencing a high level of resistance to the standard first line of antibiotic treatment.

In the first five days, the campaign sought out schools and nurseries, where the targeted age group could be easily reached in the key areas of Harare before fanning out through communities and clinics.

The response, says Dr Marc Poncin, WHO consultant for cholera and typhoid vaccination campaigns in Zimbabwe, has been overwhelmingly optimistic: “We have found that people have understood the benefits of this vaccine and are eager to take part in the vaccination. We expect to reach our target number of vaccinations by the end of the eight-day campaign.”

Hugging her 2-year-old daughter, Sarah Nyamande says she has witnessed people in her community getting sick and some dying. “This vaccine will make sure my child is protected from contracting typhoid because, until we have safe water, there is a chance that she might get it.”