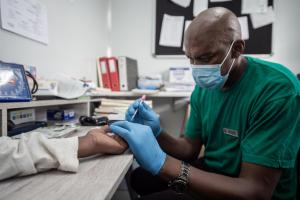 Brazzaville – Africa has made significant progress against HIV over the past decade, reducing new infections by 43% and nearly halving AIDS-related deaths. However, the continent is unlikely to end AIDS as a public health threat by 2030 with many countries falling behind key elimination milestones and COVID-19 aggravating challenges, an analysis by World Health Organization (WHO) finds.

To achieve the 2030 global development goal of ending AIDS, countries should ensure that by 2025 95% of people living with HIV know their status (target 1), 95% of those who know their status are on treatment (target 2) and 95% of those receiving treatment have their viral load suppressed (target 3). The Fast-Track strategy to end AIDS was initiated in December 2015 by the Joint United Nations Programme on HIV/AIDS (UNAIDS) and then in December 2020, the new 95-95-95 five-year plan replaced the previous targets.

WHO is tracking progress toward the 95-95-95 targets with a scorecard which was released today at the International Conference on AIDS and Sexually Transmitted Infections in Africa gathering in Durban, South Africa. The scorecard finds that in December 2021, countries in the African region reported 87% of people living with HIV know their status, of those 77% are on treatment and 68% have low viral load. So far only nine countries—Botswana, Cabo Verde, Kenya, Lesotho, Malawi, Nigeria, Rwanda, Uganda and Zimbabwe—are on track to reach the 95-95-95 targets by 2025.

“This scorecard is a wake-up call for African governments to stay focused on ending AIDS,” said Dr Matshidiso Moeti, WHO Regional Director for Africa. “COVID-19 has made the fight against HIV all the more challenging, but one virus must not win out over another. We must tackle COVID-19 and HIV in parallel.”

The scorecard finds that no country has met all three 95-95-95 targets, but Eswatini has exceeded the first two and is within sight of the third, with 93% of people on treatment having their viral load suppressed.

Three countries—Cabo Verde, Djibouti, and Kenya—have met the first target. Cabo Verde has also reached the second. Eight countries are close to meeting the first target and three— Rwanda, Uganda and Zimbabwe—are nearing the second objective, but inadequate access to HIV testing and treatment for key populations is hampering progress. Community-based services and stigma-free health facilities can help ensure men who have sex with men, injecting drug users, sex workers and other key populations get the health care they need.

Target three has made the least progress, with 48% of countries reporting no data. This is due to the scarcity of viral load testing centres in many countries, especially in rural areas, which has worsened during the COVID-19 pandemic as testing centres have turned to focus on the new virus.

“Africa has come so far, and we know how to end AIDS. But unless governments make a fresh push, increasing resources and commitment to strengthening their fragile health systems we will not reach the last mile,” Dr Moeti said.

Key steps to accelerate the momentum against the disease include improving access to HIV treatment and care, notably by decentralizing services to the grassroots and eliminating user fees for key services, increasing domestic funding by governments for HIV programmes as well as boosting the fight against stigma and discrimination so that those who need care have no fear seeking it.