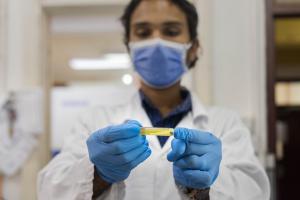 Brazzaville – As COVID-19 cumulative cases in Africa top 3 million and daily case numbers exceed the first wave peak, the continent is now confronted with emerging variants of the virus. Revamped public health measures are ever more critical to avert a runaway surge in infections that could stretch health facilities to the breaking point.

An average of 25 223 cases were reported each day between 28 December 2020 and 10 January 2021 in Africa, which is nearly 39% higher than the July 2020 two-week peak of 18 104 daily average cases. Yet numbers may rise further in the coming days in the wake of traveling, gathering, and festivities over the Christmas and New Year holidays.

Overall cases in the region have risen steadily since mid-September 2020, with a steeper rise from late November. In addition, a new variant of the virus called 501Y.V2 is circulating widely in South Africa, accounting for most of the new infections during the second wave.

Mutations of the virus are unsurprising as the more the pandemic spreads the higher the likelihood of changes. However, preliminary analysis finds the 501Y.V2 variation to be more transmissible. Genomic sequencing has found the variant present in Botswana and Zambia. Nigeria is also carrying out more investigations on a variant identified in samples collected in August and October.

Deeper investigations are underway to fully understand the epidemiological implications, but at present, there are no indications the new variant increases the severity of the disease.

“Even if the new variant is not more virulent, a virus that can spread more easily will put further strain on hospitals and health workers who are in many cases already overstretched,” said Dr Matshidiso Moeti, the World Health Organization (WHO) Regional Director for Africa. “This is a stark reminder that the virus is relentless, that it still presents a manifest threat, and that our war is far from won.”

With WHO support, African countries are reinforcing genome sequencing efforts, which are key to finding and understanding new variants as they emerge and to help blunt their impact.

WHO and the Africa Centres for Disease Control and Prevention network of genome sequencing laboratories in Africa is supporting governments with training and data analysis on genome sequencing, bioinformatics and technical expertise. WHO has also developed guidance on containing new variants and is assisting countries to manage and safely transport samples for sequencing and analysis.

While much progress is being made in building genome sequencing capacity, the more than 5000 sequences which have been conducted so far in the region account for just 2% of global sequencing data.

“We call on all countries to increase testing and sequencing of the virus to swiftly spot, track and tackle new COVID-19 variants as soon as they appear. To defeat an agile, adaptive and relentless enemy, we must know and understand its every move, and double down on what we know works best against all variants of the virus,” said Dr Moeti. “We must not become complacent. We must persist with the proven public health measures that helped stop the spread of the virus during the first wave – that’s physical distancing, constant handwashing and wearing masks in public spaces.”