Africa advances on goal of cervical cancer elimination across the continent 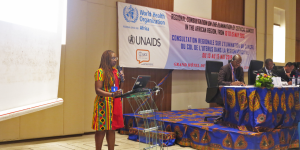 Africa advances on goal of cervical cancer elimination across the continent

Brazzaville, 15 May 2019 – The cervical cancer burden falls unequally on Africa, with 19 of the 20 most affected countries on this continent. The disease kills 311 000 women a year worldwide and is the second most common cancer among women in the African region. Yet, cervical cancer is one of the most preventable and curable forms of cancers, through vaccination, early detection and treatment. Bringing cervical cancer to an end is now a priority for the World Health Organization (WHO).

“With rates for cervical cancer up to six times higher in the African region than in North America, we can see that the disease is one of inequity,” said Dr. Matshidiso Moeti, WHO Regional Director for Africa. “We expect the new global strategy to close this gap.”

At a consultation, held from 13-15 May and organized by the WHO Regional Office in Brazzaville, Republic of Congo, WHO Member States, academia, civil society and UN partners reviewed the draft Global Strategy Towards Cervical Cancer Elimination.

The regional perspective was provided to the draft strategy, and it was agreed that a framework for accelerating and implementing the new global strategy to eliminate cervical cancer in the African region is paramount. Participants agreed with the suggested elimination threshold of less than four cases per 100 000 people per year as well as to the 90/70/90 targets. These targets refer to 90% of women fully vaccinated by the age of 15, 70 % of women screened with a high-precision test by 35 years of age and 90% of women with cervical disease receiving appropriate treatment and care.

“In many parts of Africa, cervical cancer is not identified or treated until it has reached an advanced stage due to insufficient access to health care services, effective screening and early treatment” said Dr. Joseph Caboré, Director for Programme Management, WHO Regional Office for Africa. “We must ensure every woman has access to screening, and those diagnosed with pre-cancer and early invasive cervical cancer receive affordable, effective, and quality treatment.”

Participants emphasized the need for the global strategy to be accompanied by clear funding mechanisms for its implementation.

During the consultation, the energy, enthusiasm and passion for ending the scourge of cervical cancer as a public health problem in the African region was evident in all the country presentations, discussions. Input into the draft global strategy was overwhelming.

Cervical cancer is caused by the sexually transmitted human papillomavirus (HPV), which is the most common viral infection of the reproductive tract. Risk factors associated with cervical cancer include; early sexual activity, multiple sexual partners, exposure to other sexually transmitted infections such as HIV and smoking among others. The disease can be prevented through vaccination for girls aged 9 to 14 years, the ages at which the vaccine has the highest immune response; routine cervical cancer screening for all women aged 30–49 years and early treatment for those with pre-cancerous lesions as recommended by WHO.

Strategies to address cervical cancer and achieve treatment for all need to deal with health inequities that arise from the societal conditions in which women are born, grow, live and work. Barriers to education, employment, housing and a healthy environment must also be mitigated. Cultural and socioeconomic factors that limit cancer screening, early detection and care must be taken into account. 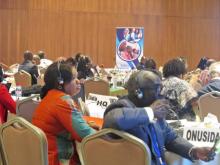 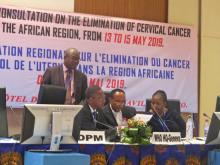 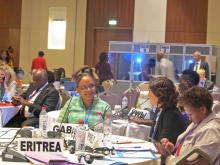