On 28 May 2016, the Ministry of Health of Kenya notified WHO of an outbreak of Chikungunya in Mandera East sub-county.

The first reports of an increase in cases with febrile illness and joint pains occurred in May 2016. Samples were collected and shipped to the Kenya Medical Research Institute (KEMRI) Arboviral Laboratory in Nairobi. On 16 May, KEMRI laboratory confirmed 7 of the 10 samples tested positive for Chikungunya virus. All samples tested negative for other arboviruses including: dengue, yellow fever and West Nile viruses.

As of 30 June 2016, 1,792 cases had been line listed. No deaths have been reported so far. However there is a risk of underreporting of cases since many patients are not reporting to health facilities. There have been outbreaks of Chikungunya in neighbouring Bula Hawa region in Somalia border region originating from Mogadishu. It is estimated that about 80% of the population and 50% of the health work force in Mandera town were affected by Chikungunya. Cases with severe debilitating joint pains were being managed as inpatients for a short duration for 1 or 2 days. However, the majority of the cases are not seeking treatment in health facilities.

On 9 September 2015, the Ministry of Health and Social Affairs (MOHSA) of Senegal notified WHO of active circulation of chikungunya virus in the region of Kédougou.

The circulation began on 27 August 2015. Samples were collected from 14 suspected cases for laboratory-confirmation at the Institut Pasteur of Dakar. Ten (10) samples tested positive for chikungunya virus. As of 8 September 2015, ten (10) chikungunya confirmed cases were reported. The latest active circulation in the affected area was reported between 2009 and 2010.

Chikungunya is a mosquito-borne viral disease that is transmitted from human to human by the bites of infected female mosquitoes. Most commonly, the mosquitoes involved are Aedes aegypti and Aedes albopictus, two species which can also transmit other mosquito-borne viruses, including dengue.

These mosquitoes can be found biting throughout daylight hours, although there may be peaks of activity in the early morning and late afternoon. After the bite of an infected mosquito, onset of illness occurs usually between 4 and 8 days but can range from 2 to 12 days.

It is characterized by an abrupt onset of fever frequently accompanied by joint pain. Other common signs and symptoms include muscle pain, headache, nausea, fatigue and rash. The joint pain is often very debilitating, but usually ends within a few days or weeks. Most patients recover fully, but in some cases joint pain may persist for several months, or even years. Occasional cases of eye, neurological and heart complications have been reported, as well as gastrointestinal complaints.

If chikungunya cases are confirmed, the treatment is to mitigate pain and fever using anti-inflammatory drugs along with rest. Persistent joint pain may require analgesic and long-term anti-inflammatory therapy. Prevention is entirely dependent upon taking steps to avoid mosquito bites and elimination of mosquito breeding sites.

Chikungunya is characterized by an abrupt onset of fever frequently accompanied by joint pain. Other common signs and symptoms include muscle pain, headache, nausea, fatigue and rash. The joint pain is often very debilitating, but usually lasts for a few days or may be prolonged to weeks. Hence the virus can cause acute, subacute or chronic disease.

Most patients recover fully, but in some cases joint pain may persist for several months, or even years. Occasional cases of eye, neurological and heart complications have been reported, as well as gastrointestinal complaints. Serious complications are not common, but in older people, the disease can contribute to the cause of death. Often symptoms in infected individuals are mild and the infection may go unrecognized, or be misdiagnosed in areas where dengue occurs.

Chikungunya has been identified in over 60 countries in Asia, Africa, Europe and the Americas.

The virus is transmitted from human to human by the bites of infected female mosquitoes. Most commonly, the mosquitoes involved are Aedes aegypti and Aedes albopictus, two species which can also transmit other mosquito-borne viruses, including dengue. These mosquitoes can be found biting throughout daylight hours, though there may be peaks of activity in the early morning and late afternoon. Both species are found biting outdoors, but Ae. aegypti will also readily feed indoors.

After the bite of an infected mosquito, onset of illness occurs usually between 4 and 8 days but can range from 2 to 12 days.

Several methods can be used for diagnosis. Serological tests, such as enzyme-linked immunosorbent assays (ELISA), may confirm the presence of IgM and IgG anti-chikungunya antibodies. IgM antibody levels are highest 3 to 5 weeks after the onset of illness and persist for about 2 months. Samples collected during the first week after the onset of symptoms should be tested by both serological and virological methods (RT-PCR).

The virus may be isolated from the blood during the first few days of infection. Various reverse transcriptase–polymerase chain reaction (RT–PCR) methods are available but are of variable sensitivity. Some are suited to clinical diagnosis. RT–PCR products from clinical samples may also be used for genotyping of the virus, allowing comparisons with virus samples from various geographical sources.

There is no specific antiviral drug treatment for chikungunya. Treatment is directed primarily at relieving the symptoms, including the joint pain using anti-pyretics, optimal analgesics and fluids. There is no commercial chikungunya vaccine.

The proximity of mosquito vector breeding sites to human habitation is a significant risk factor for chikungunya as well as for other diseases that these species transmit. Prevention and control relies heavily on reducing the number of natural and artificial water-filled container habitats that support breeding of the mosquitoes. This requires mobilization of affected communities. During outbreaks, insecticides may be sprayed to kill flying mosquitoes, applied to surfaces in and around containers where the mosquitoes land, and used to treat water in containers to kill the immature larvae.

For protection during outbreaks of chikungunya, clothing which minimizes skin exposure to the day-biting vectors is advised. Repellents can be applied to exposed skin or to clothing in strict accordance with product label instructions. Repellents should contain DEET (N, N-diethyl-3-methylbenzamide), IR3535 (3-[N-acetyl-N-butyl]-aminopropionic acid ethyl ester) or icaridin (1-piperidinecarboxylic acid, 2-(2-hydroxyethyl)-1-methylpropylester). For those who sleep during the daytime, particularly young children, or sick or older people, insecticide-treated mosquito nets afford good protection. Mosquito coils or other insecticide vaporizers may also reduce indoor biting.

Basic precautions should be taken by people travelling to risk areas and these include use of repellents, wearing long sleeves and pants and ensuring rooms are fitted with screens to prevent mosquitoes from entering.

Chikungunya occurs in Africa, Asia and the Indian subcontinent. Human infections in Africa have been at relatively low levels for a number of years, but in 1999–2000 there was a large outbreak in the Democratic Republic of the Congo, and in 2007 there was an outbreak in Gabon.

Starting in February 2005, a major outbreak of chikungunya occurred in islands of the Indian Ocean. A large number of imported cases in Europe were associated with this outbreak, mostly in 2006 when the Indian Ocean epidemic was at its peak. A large outbreak of chikungunya in India occurred in 2006 and 2007. Several other countries in South-East Asia were also affected. Since 2005, India, Indonesia, Maldives, Myanmar and Thailand have reported over 1.9 million cases. In 2007 transmission was reported for the first time in Europe, in a localized outbreak in north-eastern Italy. There were 197 cases recorded during this outbreak and it confirmed that mosquito-borne outbreaks by Ae. Albopictus are plausible in Europe.

In December 2013, France reported 2 laboratory-confirmed autochthonous cases in the French part of the Caribbean island of St Martin. Since then, local transmission has been confirmed in over 43 countries and territories in the WHO Region of the Americas. This is the first documented outbreak of chikungunya with autochthonous transmission in the Americas. As of April 2015, over 1 379 788 suspected cases of Chikungunya have been recorded in the Caribbean islands, Latin American countries, and the United States of America. 191 deaths have also been attributed to this disease during the same period. Canada, Mexico and USA have also recorded imported cases.

On 21 October 2014, France confirmed 4 cases of locally-acquired chikungunya infection in Montpellier, France. In late 2014, outbreaks were reported in the Pacific islands. Currently chikungunya outbreak is ongoing in Cook Islands and Marshall Islands, while the number of cases in American Samoa, French Polynesia, Kiribati and Samoa has reduced. WHO responded to small outbreaks of chikungunya in late 2015 in the city of Dakar, Senegal, and the state of Punjab, India.

The species Ae. albopictus thrives in a wider range of water-filled breeding sites than Ae. aegypti, including coconut husks, cocoa pods, bamboo stumps, tree holes and rock pools, in addition to artificial containers such as vehicle tyres and saucers beneath plant pots. This diversity of habitats explains the abundance of Ae. albopictus in rural as well as peri-urban areas and shady city parks.

In Africa several other mosquito vectors have been implicated in disease transmission, including species of the A. furcifer-taylori group and A. luteocephalus. There is evidence that some animals, including non-primates, rodents, birds and small mammals, may act as reservoirs.

WHO responds to chikungunya by:

WHO encourages countries to develop and maintain the capacity to detect and confirm cases, manage patients and implement social communication strategies to reduce the presence of the mosquito vectors.

END_OF_DOCUMENT_TOKEN_TO_BE_REPLACED 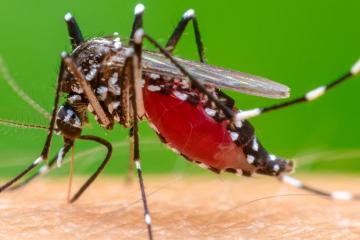 WHO supports Ministry of Health to contain Chikungunya Outbreak 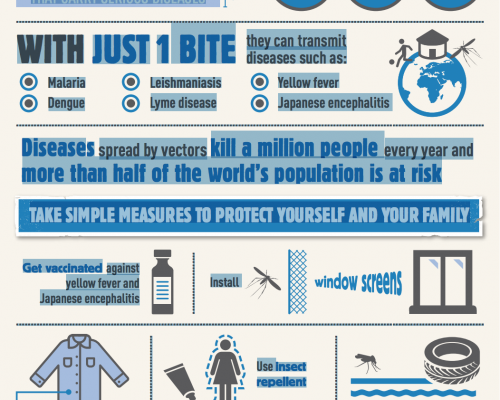