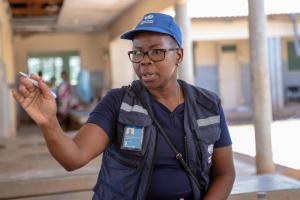 Raquel Mahoque Maguele works at the WHO country office in Mozambique. She is in Beira as health operations coordinator.

"Our major focus is on prevention of waterborne diseases such as cholera, malaria prevention, continuity of treatment of chronic diseases, water and sanitation and nutrition."

What does your team do?

In the health operations team, we support the Ministry of Health in the response to cyclone Idai in such areas as disease prevention and control. Our major focus is on prevention of waterborne diseases such as cholera, malaria prevention, continuity of treatment of chronic diseases, water and sanitation and nutrition.

At the beginning of the response, soon after the cyclone hit, the priority was also trauma treatment for victims.

What have some of your challenges been?

Some of the challenges were mainly multisectoral coordination so that all sectors and partners understood the priority of diseases including cholera and malaria.

We have also had some language challenges in communicating with communities and government. Luckily we managed to overcome those challenges we continue to give direct support to the Ministry of Health and the Provincial Health Directorate.

We coordinate the partners on the ground, some of whom were already here, while others are partners who came to the Idai response.

How did you work together against cholera?

Here for example we have cholera with more than five thousand cases and we only had eight deaths. Why? Because there was disease control in place. There was a very serious job done at the cholera treatment centres that ensured there was no high mortality rate within the cholera centres, for example through oral rehydration booths.

The result is this: we had cases of cholera in some neighborhoods, but few deaths.

One of the challenges was the very structure of the city. As a result of the cyclone, several neighborhoods and many water and sanitation structures, which were already in precarious shape, were destroyed. That is why we ended up with cholera.

Malaria is also another serious problem in this situation. How did you organize work against malaria?

With the water level going down, the next disease we will see is malaria. We are supporting the Government to work with communities to distribute and use mosquito nets. Also, with the various partners involved we will support the government in conducting indoor spraying.

So, all these measures will contribute to decreasing the occurrence of malaria.

We are working to support the government and we are on the ground working with the communities, in coordination with the various partners.

Cyclone Idai had a serious impact not only on the physical health of communities but also on psychology. Can they also support people with mental trauma?

The Ministry of Health and the Provincial Health Directorate took into account this aspect of psychological trauma, as many of the service providers were affected. And we support working not only in the health area, but also one of the key areas of education, in which psychosocial support is being provided by health providers, teachers and students. We have to take care of our workers and the population.

Psychological trauma takes a long time to heal. But I have to say that the people of Sofala and the other provinces are strong. They are returning to normal life.