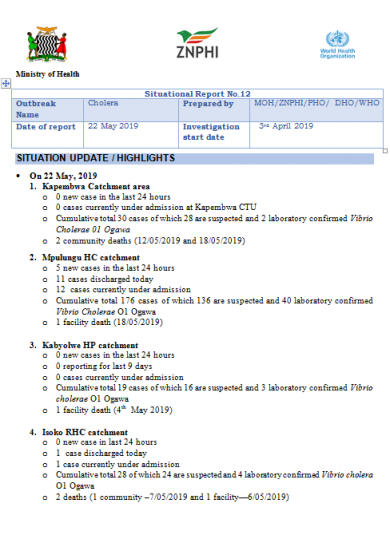 On 3rd April 2019, a 3 year 6 months old girl was brought to Kapembwa Health Post, presenting with acute watery diarrhea and vomiting with some dehydration. The condition of the patient gradually deteriorated due to continued diarrhea and vomiting. Upon realizing this, the health staff (Community Health Assistant) referred the patient to Mpulungu Health center where the Clinical Officer on duty suspected it to be a case of cholera. He admitted the patient to the isolation ward and then alerted the District Health Office. She tested positive using the Rapid Diagnostic Test (RDT) for Vibrio cholera. Additionally, stool sample submitted for culture to Kasama General Hospital laboratory tested positive to Vibrio choleraeO1 Ogawa.

Kapembwa Health post is located along the shores of Lake Tanganyika approximately 90km away from the District Hospital. It is a newly constructed facility that can only be accessed by marine transport and serves a population of about 2,900 (CSO, 2019). It is a fishing camp though some people have decided to settle there.

Three days later, on 6thApril 2019, a 12 year old male, from a different area within the township of Mpulungu, presented to Mpulungu Health center with acute watery diarrhea and vomiting. He also tested positive with the RDT for Vibrio cholerae. A stool sample was submitted to Mbala General Hospital laboratory for culture but tested negative to Vibrio cholerae. Thereafter, the district started receiving a lot of cases from both Kapembwa and several areas within the Mpulungu Township. However, all the stool samples from Mpulungu Township that were submitted to Mbala General Hospital for culture tested negative to Vibrio cholerae. Despite this, the district continued to record increased cases of acute watery diarrhea and vomiting from different areas and thus decided to continue reporting as a possible cholera outbreak.

Between 2nd and 5thMay 2019, Kabyolwe Health Post, another facility located about 120km on the shores of Lake Tanganyika, reported 10 cases of acute watery diarrhea and vomiting. One of the cases had history of travel to Nsumbu in Nsama district with his parents. He developed the symptoms a day after returning from Nsumbu. Kabyolwe is another fishing camp and has a population of about 2,600(CSO, 2019).

On 6th May 2019, another facility, Isoko RHC, located 29km from the District Hospital reported two cases of acute watery diarrhea and vomiting. One of the cases, a 47 year old female died at the facility while the health staff were trying to resuscitate her. The following day, the facility staff received a report of a 78 year old male who died in the community from acute watery diarrhea and vomiting. Isoko RHC has a catchment population of 12,059 (CSO, 2019). This area has got only one borehole and thus the majority of the people draw water for domestic use from a stream that runs along the length of the catchment area. This is the same stream where agricultural economic activities on a small scale are done especially sugar cane.

The continued increase in the number of diarrheal cases and deaths, despite negative laboratory results, prompted the District Health Office to request for epidemiological and laboratory support from the Ministry of Health (MOH) and the Zambia National Public Health Institute (ZNPHI) through the Provincial Health Office (PHO).