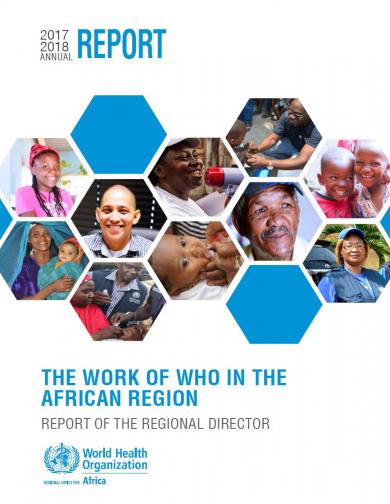 The work of WHO in the African Region: Report of the Regional Director 2017-2018

The report also highlights some of the key achievements made in implementing “The Transformation Agenda of the World Health Organization Secretariat in the African Region; 2015- 2020”, launched by the Regional Director in February 2015 and endorsed by the WHO Regional Committee for Africa at its Sixty-fifth session in September 2015.

The report demonstrates how continued progress has been made in key areas of the Transformation Agenda, including improving the capacity of WHO and Member States to detect and rapidly respond to the multiple epidemics the Region experiences; the move towards universal health coverage (UHC) as part of efforts to achieve the Sustainable Development Goals (SDGs); and the push towards making the Secretariat of the WHO African Region more proactive, results-driven and appropriately resourced to deliver on its mandate to serve Member States in attaining the highest possible level of health.