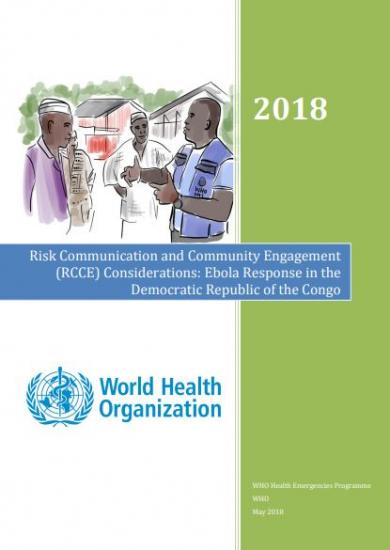 Risk Communication and Community Engagement (RCCE) Considerations: Ebola Response in the Democratic Republic of the Congo

Ebola is a serious and often fatal disease. It has no specific treatment, but a range of interventions can bring the outbreak under control and significantly increase patients chances of survival.

The Ebola virus causes an acute, serious illness which is often fatal if untreated. The virus is transmitted to people from wild animals and then spreads in the human population through human-to-human transmission.

The average Ebola case fatality rate is around 50%. Case fatality rates have varied from 25% to 90% in past outbreaks. Early supportive care with rehydration and treatment of symptoms improves survival.

Ebola virus disease (EVD) first appeared in 1976 in two simultaneous outbreaks, one in present day Nzara, South Sudan, and the other in Yambuku, Democratic Republic of the Congo. The latter occurred in a village near the Ebola River, from which the disease takes its name.

The origin of the virus is unknown, but current evidence suggests that fruit bats (Pteropodidae) may be a host.