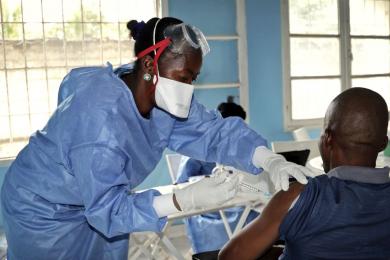 The Democratic Republic of Congo (DRC) declared its 10th outbreak of Ebola in North Kivu, a province bordering Uganda on 1 August 2018. The outbreak has spread to several health zones in North Kivu and Ituri provinces. Beni located about 100km from the Uganda/DRC border is the current epicenter. In Ituri province the affected zone Tchomia is even closer than Beni to the Uganda/DRC border (less than 20Km). As of 1st December 2018, a cumulative total of 440 cases (including 392 confirmed and 48 probable cases) with 255 deaths (case fatality of 60%) had been reported. The hot spot areas are Mabalako, Beni and Butembo health zones. These areas are also affected by an armed civil conflict with internal displacement of over one million people, and recurrent flight of refugees to neighbouring Uganda, Rwanda, Burundi, and South Sudan. The civil war has inculcated a culture of community mistrust and rumours around EVD control interventions which is impacting negatively on the effectiveness of the Ebola response in DRC; some high risk contacts refuse to be followed up, some contacts and health workers refuse vaccination, and other community members keep away Ebola patients from health facilities. These actions contribute to the sustenance of Ebola transmission chains in the communities.

Risk of spill-over of EVD to Uganda has been categorised as very high. On 28 September 2018, WHO elevated the risk at the regional level which includes Uganda from ‘high’ to ‘very high’. Uganda has a very long and largely porous border with the DRC. High population movements across the borders occur for various reason including for trade, social activities and services and asylum. There are cross-border markets in several border districts in Uganda and DRC that involve thousands of people crossing into and out of DRC and Uganda for trade purposes several days in a week.