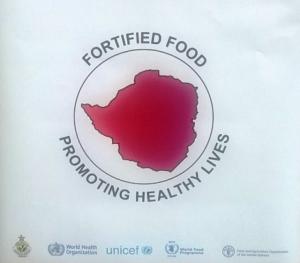 Harare, 19 November 2015:  Zimbabwe today launched the Zimbabwe National Food Fortification Strategy 2014—2018.  The strategy, which is aligned to the National Food and Nutrition Strategy for Zimbabwe, will serve as a guide at both policy and implementation levels to prevent micronutrient deficiencies. The strategy was developed to address the micronutrient deficiency burden in the country as revealed by the 2012 Zimbabwe Micronutrient Survey. According to the survey, 19% of children 6—59 months are vitamin A deficient, whilst 72% have iron deficiency, and 31% are anemic, and nearly 1.5 million working age adults with anemia suffer deficits in work performance.

Food fortification is the process of adding minute levels of vitamins and minerals to foods during processing. It entails addition of 1 or more micronutrients during processing regardless of whether the micronutrient is present or not in the said food to increase micronutrient intake in a population; and is one of many ways to prevent and control micronutrient deficiency diseases like goiter, anemia, impaired vision and mental retardation. The food vehicles targeted for fortification are sugar, cooking  oil, maize meal, and wheat flour. Sugar will be fortified with vitamin A; cooking oil with vitamin A and D; and wheat flour and maize meal with vitamin A, B1, B2, B3, B6, B12, folic acid, iron and zinc. Only fortification of salt with iodine is mandatory in Zimbabwe now, and fortification of the above mentioned food vehicles will become mandatory in 2016.

The launch, which was attended by a wide range of players in the food industry, showed the support and commitment to improve the health and nutrition of Zimbabweans by many. Commitments of support for food fortification came from grain millers; sugar and oil producers; Ministries of Agriculture, Industry and trade, and the Consumer Council of Zimbabwe. The United Nations team, WHO, WFP, FAO and UNICEF also added their voice of support and congratulated the Government of Zimbabwe and the Ministry of Health and Child Care for showing commitment to improve the health and nutritional status of Zimbabweans.

Speaking at the launch, the WHO Representative Dr David Okello said WHO fully supports public health interventions that seek to prevent micronutrient deficiencies based on locally available evidence. He also highlighted the importance of having a population that is well nourished and able to adapt to the emerging global challenges.  “Poor nutrition results in a population not reaching their full cognitive and physical potentials; we should therefore, help our children to grow and be able to compete intellectually with their peers across the world, and all these issues are linked to nutrition right from early infancy to adulthood,” said Dr Okello.

In his statement to launch the strategy, the Honourable Minister of Health and Child Care Dr David Parirenyatwa said the National Micronutrient Survey of 2012 showed that many Zimbabweans, including women and children are micronutrient deficient, and do not have the proper nutrition they need to stay healthy and active.  He said the strategy is one population wide intervention to address this widespread burden of micronutrient deficiency.  He said the Government of Zimbabwe remains committed to the fight against micronutrient deficiencies in the country. “I strongly appeal to all stakeholders to unite and support the Food Fortification Strategy in order to achieve a more significant and sustainable change in the nutritional status of our nation’s people,” said Dr Parirenyatwa.

The launch was preceded by a tour of National Foods Limited, one of the largest grain millers in the country. The purpose of the tour was to view the preparedness of the food industry for the upcoming industrial food fortification processes. The delegates were taken on a tour of the milling plant and saw the milling process of wheat flour, maize meal and production of cooking oil and viewed the point of fortification (micro-dosing units) and how the fortification will be done during the process. 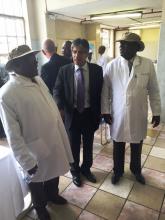