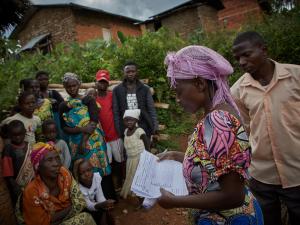 Butembo, DRC, 22 January 2020 - “Why is Ebola taking so long to end?” a man attending a community meeting outside Butembo town in the northeast of the Democratic Republic of the Congo (DRC) wants to know.

Listening to community concerns such as these, Hamadou Boiro, the World Health Organization’s (WHO) social anthropologists team leader, responds concisely: “It’s because there are some in your community who refuse to believe that Ebola exists and refuse to seek treatment.”

Since the outbreak was declared in August 2018, response teams have faced difficulties in their efforts to bring the epidemic under control. In 2019, WHO recorded around 390 attacks on health care facilities. The attacks killed 11 and injured 83 health workers.

In February 2019, Ebola treatment centres in Butembo and Katwa towns were twice set ablaze, and in March, both were burned to the ground. Richard Mouzoko, a doctor working for the WHO, was attacked and killed in April during a meeting at Butembo University Hospital.

These attacks have often severely curtailed operations, allowing Ebola to flare up. Recent armed attacks in Beni, Biakato and Mangina threaten the efforts made to control the spread of the virus in the hotspots.

Incidents arising from community reluctance to Ebola response peaked in June 2019 when 371 incidents were recorded. A community engagement survey revealed a significant lack of trust in the responders: around 36% of respondents trusted the Ebola responders; a third denied the existence of Ebola and another 30% did not know about the disease. Some 33% believed rumours around the Ebola vaccine.

More than 80% of the respondents had heard rumours about Ebola treatment centres, and many people said they were scared of dying there.

Mwami Saidi Katwa was one of a group of traditional leaders from Kalonge, South Kivu, who met Boiro recently. He complained that the early response teams had failed to properly engage with him and the other chiefs. Learning from initial mistakes, WHO then started engaging with community teams in a better way.

“If only the teams had begun by getting the backing of traditional leaders, their experience with the community would have been more positive,” Katwa said.

To turn things around, a team of social anthropologists led by Boiro was sent into the most recalcitrant communities to get to the bottom of their concerns and pave the way for other community engagement colleagues. The team is largely made up of Congolese nationals knowledgeable on the local culture and customs and speak the local language.

“Our key advantage is we understand and empathise with the culture. In many cases we visit the leaders and their communities first to facilitate engagement, then explain their concerns to our colleagues,” says Boiro.

Traditional and religious leaders are an important part of the engagement process. They set the tone for the entire community to follow.

Although people still raise concerns that they cannot perform burial rituals as before, and continue to harbour doubts about Ebola symptoms or what happens when a patient is cared for in an Ebola treatment centre, they are opening up due to the efforts being made by teams such as the one led by Boiro. The ongoing outbreak is DRC’s tenth and the world’s second worst.

At the community meeting, Boiro and the man who wanted to know why Ebola was persistent, delve deeper into discussions as others listen attentively. It turns out that some had initially believed the claims of a local politician, nicknamed the Pillar of Butembo. In December 2018, the politician told his followers that the disease had been invented by the Government as an excuse for annulling the presidential vote in the Ebola-stricken areas. For a population that has endured years of trauma and invasion, it was the last straw.

People were venting their frustration on responders for many reasons, he recalls. “Some thought Ebola was invented so foreigners could make money from it; some put the disease down to sorcery and others were suspicious that the outbreak was timed as an excuse to postpone the 2018 presidential election which was cancelled in Butembo, Beni and Yumbi.”

Despite some confrontations, the anthropologists and the community engagement teams have persisted in addressing residents’ fears. Gradually, the strategy of engaging with and actively listening to leaders and different community groups has paid off. Even the man at the community meeting was won over. At the end of the discussion he approached Boiro and his team to say he had seen the sense of what they had to say and offered to collaborate with them to reach out to other communities.

“Each culture has its way of doing things. By showing respect for our culture, you are conferred protection and this allows you access to the community. From today you can count on my support to fight the Ebola outbreak.”