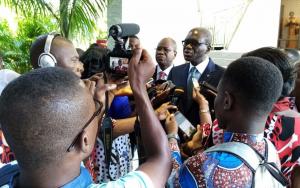 The WHO African Region has not experienced any outbreak of wild poliovirus since 2016, with the last case detected in Nigeria’s Borno State. This achievement makes the region eligible to be certified free of wild poliovirus in 2020. The region, however, still experiences outbreaks of rare circulating vaccine-derived polioviruses in 13 countries, almost half of them in West Africa.

Although vaccine-derived polioviruses are rare, they are sometimes found in severely underimmunized populations living in areas with inadequate sanitation. When children are immunized with the oral polio vaccine, the live virus replicates in their intestines for a short time, which allows them to build up the needed antibodies before being excreted. If immunization coverage remains low in a community and sanitation remains inadequate, the excreted virus can be transmitted to susceptible populations, leading to genetic changes and emergence of vaccine-derived polioviruses.

WHO, UNICEF and other partners are supporting the efforts of health ministries in all the 13 affected countries (Angola, Benin, Cameroon, Central African Republic, Côte d'Ivoire, Chad, Democratic Republic of the Congo, Ethiopia, Ghana, Niger, Nigeria, Togo and Zambia) to respond to the circulating vaccine-derived poliovirus outbreaks they are experiencing.

“The workshop will train the participants on standard operating procedures for polio outbreak response according to international health regulations, including strategies that can strengthen a country’s disease surveillance system. At the end of the week, each country will draft a preparedness plan to respond to circulating vaccine-derived poliovirus outbreaks,” Dr Ndoutabe added.

“Outbreaks of circulating vaccine-derived poliovirus are a challenge for the region, but we are capable of overcoming it through outbreak-response preparedness and vigilant surveillance,” Dr Ndoutabe concluded.

Thanks to the dedication of the Global Polio Eradication Initiative, polio cases have reduced by 99.9% since 1988, bringing the world closer than ever to ending polio. The initiative is a public-private global partnership comprising national governments; WHO; Rotary International; the United States Centers for Disease Control and Prevention; UNICEF; the Bill & Melinda Gates Foundation; Gavi, the Vaccine Alliance; and a broad range of long-term supporters.