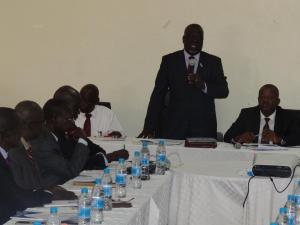 The stakeholders agreed to enhance joint efforts, accelerate progress of national NCDs response with emphasis on key actions on priority risk factors and NCDs. The call for action prioritizes action against harmful use of alcohol and tobacco; establishment of a high level NCD Multi-Sectoral coordination committee and an NCD technical Working Group; development of NCD Multi-Sectoral Action Plan (MSAP) and mobilization of resources to combat the risk factors, as well as mental illness, injuries, hypertension, diabetes and cancer in South Sudan.

Non Communicable diseases (NCDS) that include cardiovascular disease (CVD), cancer and metabolic diseases such as diabetes and obesity, are on the increase in Sub Saharan Africa including South Sudan associated with an epidemiological transition. Although South Sudan has not yet established the national burden of common NCDs and associated risk factors, a cohort study conducted during 2010 - 2012 by Juba Teaching Hospital, which analyzed over 5,600 blood donors, estimated a prevalence of hypertension at 19.3%. It is also estimated by the Ministry of Health that about 7% of South Sudanese adults are diabetic. Mental health is another challenge facing South Sudan. The decades of conflict in the country have left a legacy of psychosocial distress. The WHO estimates that ¼ of the 6 million population of humanitarian concern, developed some form of mild to moderate or severe mental health condition requiring urgent action.

Dr Riek Gai Kok, Honorable Minister of Health, noted that although the World Health Assembly of May 2013 endorsed the Global Action Plan for the Prevention and Control of NCDs 2013-2020, not much progress has been made towards meeting the targets in South Sudan. He commended WHO for organizing this forum which will help the country address the challenges in NCDs prevention and control in South Sudan.

Mr Liyosi Evans WHO NTDs Program Manager, on behalf of Dr Abdulmumini Usman, WHO Country Representative to South Sudan, stressed the urgency of addressing the NCDs in South Sudan. He called upon all stakeholders to take action to control the risk factors which include alcohol, tobacco use and substance abuse, to reduce the harm to the health of the population. He reiterated WHO’s continued commitment to support to the Ministry of Health addressing the NCDs and reducing premature deaths in-line with the target of the Sustainable Development Goals. 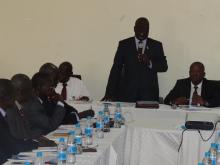 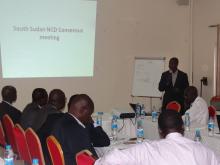 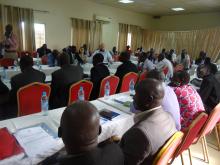 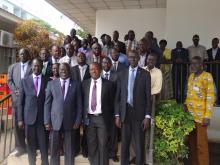