WHO supports Delta State in the fight against Cholera outbreak 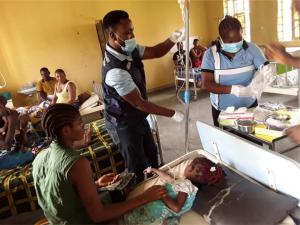 WHO supports Delta State in the fight against Cholera outbreak

Asaba, 25 February 2021 - “I was really worried for the life of my daughter when she became weak after several episodes of watery stooling and vomiting, but now I can relax because she is getting the treatment she needs at the hospital, says Mrs Erekake, the mother of Tamara, a four-year-old female patient who is being treated at the Bomadi General Hospital in Delta state.

Tamara is one of the lucky patients who, due to quick intervention from the Delta State Government with the support of the World Health Organization, has been able to get the necessary medical intervention to recuperate from the disease.

WHO supported the Delta State Public Health Emergency Operations Centre (PHEOC) to quickly mount investigation and response activities on 27th January 2021 following a notification of 26 cases of frequent watery diarrhea and  vomiting including 6 deaths in Tuomo and Ogulagha communities of Burutu LGA.

The WHO team supported the state health authorities to establish a robust multi-sectoral coordination mechanism to the response; involving the Ministries of Environment and Water Resources. In line with her mandate, WHO assisted the state in monitoring the disease trend which currently indicates the outbreak being on a steady decline. Additionally, WHO supported the state in strengthening surveillance, training of health care workers on appropriate case management, provision of medication and other supplies, distribution of appropriate IEC materials; and risk communication and engagement of the affected communities.

Further investigation revealed that the main source of drinking water in the affected communities during the dry season, a nearby river, was most likely contaminated with faeces and refuse. There is minimal filtration or boiling of drinking water by community members, with only  potassium alum usually added to make it clear before drinking. Poor personal hygiene and environmental sanitation are also major factors contributing to the outbreak.

Samples were taken from some of the cases for laboratory investigations. Results from  tests carried out on stool and water samples collected were positive for bacterium, Vibrio cholerae of the Ogawa serotype 139. Subsequent test reports however indicate that the outbreak is on a steady decline.  As of 18 February 2021, a total of 481 cases with 28 deaths had been reported in Burutu LGA with a case fatality ratio of 5.8%. 63% of the cases are below five years of age.  This LGA had last reported a cholera outbreak in February 2019 with 9 cases and no deaths.

Community sensitization
To contain the outbreak, WHO supported the State government in sensitizing the community on the cause of the disease, the preventive measures and the need for immediate reporting and treatment.

A participant at the sensitization session, Chief Tamani Andrew, the Amayanabor of Tuomo community, a traditional leader in Burutu LGA in Delta state said, “my community has been confronted with an outbreak of a disease, causing frequent watery stooling, vomiting and death in some people. We are now educated on the cause of the outbreak and what measures should be taken to stop the spread of the disease and prevent future occurrence.”

Expressing immense gratitude for WHO’s support in containing the outbreak, Delta State Commissioner for Health, Dr Mordi Onoye, says ‘WHO has once again proven to be a formidable partner to the Delta state government in the response to all health emergencies and in strengthening health systems in general’

Dr Onyinye Emefiene, the WHO Delta State Coordinator explained that, ‘despite these laudable efforts, more work is needed by the state health authorities and partners to sustain community health education on behavioral change especially on stopping open defecation, and  early disease reporting’

WHO remains committed to supporting the government of Delta state to prevent and control disease outbreaks in the State added Dr Emefiene. WHO will provide support in the production and airing of jingles on cholera prevention in local languages, provision of transport logistics for active case search, on-the-job training of health workers as well as supervision’.