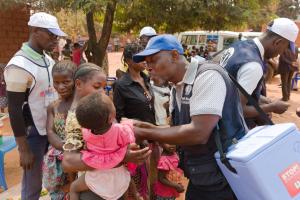 Luanda, 3 December 2019 – The World Health Organization (WHO) and partners are supporting the efforts of the Angolan Government to end a polio outbreak that started in May this year. Polio is a viral disease, that is transmitted from person to person, mainly through a faecal-oral route or, less frequently, through contaminated water or food, and multiplies inside the intestines.

While there is no cure for polio, the disease can be prevented through administration of a simple and effective vaccine. That is why efforts are underway across the country to rapidly boost immunity levels in children, and protect them from polio paralysis.

In response to the outbreak that has already affected 49 children as of date, the government has vaccinated 4.5 million children in targeted districts in 15 of the country’s 18 provinces.

“The polio vaccination campaign that the Angolan government is leading is critical in disrupting the polio outbreak. All of us must work together to sensitize our families and communities to the need for all children to be vaccinated. We need to continue engaging to develop a robust routine disease surveillance and vaccination system to prevent, detect and rapidly respond to any polio cases," said Dr Hernando Agudelo, WHO Representative in Angola.

“Given the challenges that Angola faces in ensuring the immunization of all children, we need to remain resilient in our vaccination and epidemiological surveillance efforts so that no child is left behind and at risk of paralysis,” added Dr Agudelo.

The response to the polio outbreak requires active disease surveillance and an immense multisector collaboration. In this journey, WHO, the United Nations Children’s Fund (UNICEF), Rotary International, Centers for Disease Control and Prevention (CDC), Bill & Melinda Gates Foundation and strategic partners, have been supporting the Government of Angola in strategic actions to control and block the transmission of the poliovirus.

When children are immunized with oral polio vaccine (OPV), the live attenuated vaccine virus reproduces in the intestines for a short period of time and is then excreted in the faeces to the environment, where other non-immune (unvaccinated) people can become infected, especially those in poor hygiene conditions, because the transmission mechanism of the virus is oral faecal.

However, if prolonged circulation occurs in many children due to low polio vaccination coverage, the virus changes with each replication. Mutant viruses (which change) are transmitted to susceptible populations (unvaccinated children), leading to the emergence of the so-called vaccine derived poliovirus, which can circulate in communities with low vaccination coverage, eventually causing paralysis.

Worldwide experience shows that the only way to stop the circulation of this vaccine-derived virus is by implementing two or more rounds of vaccination campaigns, using oral polio vaccine of the same serotype as the circulating virus. In Angola, the circulation of the type 2 virus has been confirmed in the laboratory and a monovalent type 2 oral polio vaccine is being used. Polio virus derived from the vaccine is not an adverse post-vaccination effect, nor does it depend on the quality of the vaccine, but rather an event that occurs when there is low polio vaccine coverage in the community.

The Government of Angola is continuing to implement outbreak response, following internationally-agreed guidelines, and at the same time further strengthening surveillance activities to rapidly detect any further cases. To successfully implement the outbreak response required the engagement of government authorities at all levels, civil society and the general population, to ensure that all children under the age of five are vaccinated against polio.

The World Health Organization contributes to a better future for people everywhere. Good health lays the foundation for vibrant and productive communities, stronger economies, safer nations and a better world. As the lead health authority within the United Nations system, our work touches people’s lives around the world every day. In Africa, WHO serves 47 Member States and works with development partners to improve the health and well-being of all people living here. The WHO Regional Office for Africa is located in Brazzaville, Congo. Learn more at www.afro.who.int and follow us on Twitter, Facebook and YouTube.