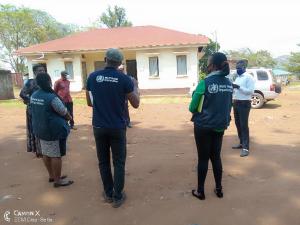 Kyabasara Primary School in Kagadi district southwestern Uganda is the epitome of a typical Ugandan rural school. A couple of brick-and-mortar buildings facing each other constitute the classes, staffroom, and office; a big compound in the middle and a latrine at the back, complete the school infrastructure.

The school, just like the rest in the country, has a big number of eager students usually in pink or green uniforms ready to imbibe knowledge from their equally eager teachers. They bustle with life, unhinged innocence, and happiness!

But following the outbreak of the Coronavirus pandemic globally and in Uganda, school life and activities were put to an abrupt halt.

However, recently, following the easing of COVID-19 restrictions, Kyabasara Primary School and others in country reopened for students in candidate classes. That was good news and indeed many students returned, keen to continue from where they stopped. But at Kyabasara, another halt was inevitable following the detection of COVID-19 cases in the school community.

During testing of COVID-19 contacts in the districts, one of the teachers and a student were found to be positive. For the health workers in the district, this was not a surprise given that as of 10th February 2021, a cumulative total of 75 cases had been detected in the district and most in the community around Kyabasara Primary school.

There was anxiety, fear and even stigmatization in the school and the surrounding community. Parents stopped their children from going to the recently opened school, students too kept away, and the teachers were concerned.

This situation was brought to the attention of the district health authorities and the World Health Organization (WHO) field office in Hoima, which was established with support from the Danish International Development Agency and is responsible for that sub-region. A mission was immediately organized to engage the community, Kagadi hospital staff and Kyabasara Primary School students and teachers.

At the school, the engagement was slow but sustained, exploring the myth, rumours and anxieties surrounding COVID-19. Teachers and students attended and their trepidation over COVID-19 was almost palpable. Their fears were assuaged and assured that if they observed the very simple Standard Operating Procedures (SoPs), they had little to worry about.

“It gives us (teachers) and the pupils courage to continue with school even after having one of our teachers infected when we get visitors like you who give us more information on the disease and status of those previously infected,” said Mr Asiimwe Eustakio the school headteacher.

The pupils too appreciated the team for the encouragement and assurance of safety while at school. A representative of the pupils said, “on behalf of my fellow pupils, I would like to thank you for coming and giving us the courage and strength to help us concentrate on our studies knowing that we are safe, and we promise to keep safe by following what you have told us.”

The stigma issue was also tackled directly with the teachers, students, and community. Reports had indicated that the student who tested positive had been denied entry into the school.  The District Surveillance Officer Mr Paul Rutabagisha Bahizi was very handy on this aspect.  He presented facts and laboratory results indicating that the asymptomatic student had tested negative after treatment and home care.

“Since I had not received information about the second test of the pupil, I could not allow her back to school.  Also, the parents were concerned about their children returning to school and needed assurance that they would not get infected,” said Mr Asiimwe Eustakio the headteacher.

To reemphasize the message, the WHO Surveillance officer, Dr Alex Barasa said, “she is very fine and has recovered from the disease after proper management under Home Based Care and is free to interact with other people even go back to school.” He, however, called on all to observe COVID-19 SOPs including proper handwashing, proper use of masks and social distancing while at school.

“With this information, I can now boldly talk to the mother of the pupil in question, the parents to allow their children to resume school and teachers too in preparation for the final Primary School Leaving examinations,” added the headteacher.

Following these engagements, the parents allowed their children to resume school and the teachers too, returned. Once again, life at Kyabasara Primary School is back to normal. It is however a “new normal” with regular hand washing, physical distancing and wearing of face masks by students, teachers, and nearby community members. 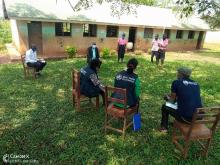