WHO scales up health response to Cyclone Idai in Mozambique 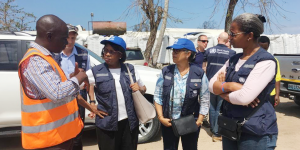 WHO scales up health response to Cyclone Idai in Mozambique

Regional Director for the WHO African Region visits disaster zone

Beira, 1 April 2019 – Today the World Health Organization (WHO) Regional Director for Africa, Dr Matshidiso Moeti, took a first-hand look at response efforts to save lives and protect health for the people in Beira, the city hardest hit by Cyclone Idai in Mozambique.

“The next few weeks are crucial and speed is of the essence if we are to save lives and limit suffering,” said Dr Moeti after visiting devastated communities and witnessing the damage to health centres caused by the cyclone.

To expand the emergency response, WHO has deployed experts, including epidemiologists, logisticians and disease-prevention experts, to build a 40-strong team.

Restoring regular health services is equally imperative as mitigating the spread of cholera and other diseases, Dr Moeti stressed. “I saw the paediatric ward of Pontagera Health Centre had been completely destroyed, the roof had been torn off and the equipment and supplies ruined by water. We must do everything we can to protect the people of Mozambique from a disease outbreak or other health problems caused by lack of access to essential services,” she said.

WHO is helping to restore primary care services so that facilities can deliver essential services, including immunization, basic treatment for common illnesses, acute malnutrition and maternal care while ensuring the ongoing supply of medications for people living with HIV, tuberculosis or diabetes.

Also of concern, Dr Moeti emphasized, are the health workers whose own families and homes have been affected. WHO is working to support them in their health care roles as well as rehabilitating the health facilities where they work.

On her visit to Beira, Dr Moeti visited the Central Hospital, a general health centre, a cholera treatment centre and two field hospitals set up by emergency medical teams from Italy and Portugal. She also visited a health clinic in a settlement camp where more than 1000 people are living temporarily.

Planning for cholera has been one of the Organization’s top priorities in its support to the Ministry of Health for this emergency. WHO has deployed cholera specialists and supported the deployment of supplies, including life-saving intravenous fluids, diagnostic tests, oral rehydration solution and other medical supplies to support cholera treatment centres.

As of this week, 500 beds are now open in seven cholera treatment centres across the affected area, with plans to boost the capacity significantly to cope with an expected increase in cases. WHO is training 30 health workers on case management for cholera and on setting and monitoring standards and protocols in those centres.

More than 900 000 doses of oral cholera vaccine from the global stockpile for emergency use are due to arrive in Beira tomorrow (Tuesday 2 April), and the Government and partners, including UNICEF, Federation of the Red Cross, Médecins Sans Frontières and Save the Children, are working around the clock to start the vaccination campaign on Wednesday, 3 April. The vaccine was sourced from the global stockpile, which is funded by Gavi, the Vaccine Alliance. Gavi is also funding operational costs of the campaign.

As of 1 April, a total of 1052 cases of cholera have been reported by the Ministry of Health, and more are expected due to the increasing numbers of people coming to health centres with acute watery diarrhoea.

At high risk of cholera infection are more than 128 000 people living in temporary shelters with unsafe water supply and poor sanitation – a high-risk environment for the spread of cholera, dysentery and other diarrhoeal diseases.

WHO is also preparing for increased cases of malaria, following the floods in this already high-risk zone. More than 750 000 insecticide-treated bednets are on the way for distribution in the affected areas. Supplies of rapid diagnostic tests and antimalarial drugs are being directed to the area.

WHO is supporting the setting up of an early warning disease surveillance system for the rapid detection of disease outbreaks. It is also working with national authorities to boost laboratory capacity and ensure that rapid diagnosis tests are available.

WHO estimates the funds required for the health response for the next three months is around US$ 40 million. The WHO Contingency Fund for Emergencies has allocated US$ 4.6 million to support the response thus far.