Sokoto, 03 May 2017 - The World Health Organization (WHO) in Nigeria has deployed 190 Polio Eradication Initiative (PEI) officers from various states and within WHO State Office to support Sokoto state government to control the outbreak of Cerebro Spinal Meningitis (CSM).

In the last two months, Nigeria has been experiencing widespread epidemic of Meningitis mainly caused by Neisseria meningitidis type C serotypes.  The states mostly affected by the epidemic are Zamfara, Sokoto, Kastina , Kebbi,  Yobe and Niger. Yobe has serotypes A and C.

PEI technical officers from Nigeria country office and field offices in Nigeria joined the WHO Sokoto team at Polio Emergency Operating Centre (EOC) to plan for the response to the outbreak which culminated in the reactive vaccination.

With its formidable work force, WHO immediately facilitated the creation of an Incident Management System at the EOC and subsequent formation of sub-groups (vaccination, case management, laboratory, Surveillance, social mobilization and logistics).

Several planning meetings, chaired by the Sokoto EOC Polio incident Manager with Commissioner for Health in attendance, culminated in the development of a micro plan that targeted 770,000 susceptible young persons aged 1-21years. The target population informed request and release of 820,000 doses of vaccines for reactive vaccination in the state by the International Coordinating Group (ICG) on Vaccine Provision, through WHO.

Speaking on the effectiveness of the coordination, Dr Mary Stephen noted that “The strong WHO presence in Sokoto state was justified and prevented the repeat of the mistakes  from the Zamfara vaccination campaign that was poorly implemented”.

With the support of WHO, the state conducted detailed outbreak investigations  in the most affected LGAs of Gudu, Dange Shuni, Sokoto South, Sokoto North, Rabah and Tureta.

One of the cardinal strategies employed to rapidly curtail the menace of the CSM outbreak was the involvement of different cadres of WHO polio personnel such as cluster consultants, Local Government Area (LGA) Facilitators and Field volunteers. Others include planning and coordination of training, vaccine management and supervision of Men C pre-implementations activities with Sokoto state team and other partners.

With four days into the reactive vaccination exercise, 560,000 of the targeted 740,000 have been vaccinated which represent 76% coverage. The vaccination will be extended by two days of mop exercise in wards not achieving 90% coverage.

The WHO Country Representative to Nigeria, Dr Wondimagegnehu Alemu appreciated the polio infrastructure for supporting the response without jeopardizing the polio eradication activities.

He stressed that the support for polio eradication to the Federal Government of Nigeria through the WHO is made possible by funding from the Bill & Melinda Gates Foundation, European Union, Government of Germany  through KfW, Global Affairs Canada, USAID, Community Chest Korea through Korea Foundation for International Healthcare (KOFIH)), DFID (UK), Rotary International and the World Bank. 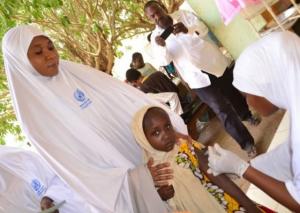