WHO formally announces removal of Nigeria from polio-endemic list 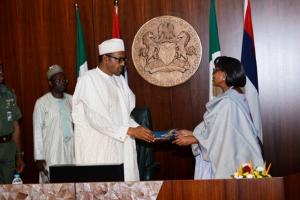 WHO formally announces removal of Nigeria from polio-endemic list

Abuja, 26 October 2015 – Today, the World Health Organization (WHO) formally removes Nigeria from the list of polio-endemic countries. The announcement comes after the historic achievement of the country in interrupting the transmission of wild poliovirus for a period of 15 months, which exceeds WHO’s target for interruption. Only 2 countries (Afghanistan and Pakistan) remain polio-endemic, down from more than 125 in 1988.

To recognize this landmark achievement, the WHO Regional Director for Africa, Dr Matshidiso Moeti, attended an official ceremony at the State House to formally announce to the Government of Nigeria, through President Muhammadu Buhari, WHO’s  decision to remove Nigeria from the polio-endemic list.

“It is my pleasure to congratulate the people and the Government of Nigeria on the interruption of wild poliovirus transmission and to inform that Nigeria has been officially removed from the list of polio-endemic countries,” said Dr Moeti, who is representing the WHO Director-General Dr Margaret Chan.

“The remarkable achievement is a true testament of what political will, government leadership, community ownership, and the collective efforts of partners can achieve when united behind a global public health good. To achieve polio eradication, we must ensure that in the next two years no child is paralyzed due to polio. There is no time for complacency and we must remain vigilant,” added Dr Moeti.

The dramatic progress in the fight against polio in Nigeria has been greatly facilitated through the involvement of the states and local government areas (LGAs). To sustain interruption, they will play an instrumental role in re-doubling efforts and ensuring consistent, routine immunization is made available to all children as well as strengthening surveillance to timely detect and respond to any polio case.

During her meeting with His Excellency President Muhammadu Buhari, Dr Moeti made an impassioned call to further create community demand and strengthen access to immunization, particularly in the most under-served, high-risk and insecure areas in the country.

“Health care workers, community mobilizers, religious and traditional leaders have been the real unsung heroes in helping to reach every last child with life-saving polio vaccine. The combined, coordinated efforts of these front-line workers in Nigeria has brought us to where we are today, a step closer to global polio eradication.”

To sustain the significant progress made, there is also a need to ensure that at the state level, the LGA chairmen are fully involved in supporting the planned polio campaigns in December 2015 and in 2016; and ensure timely disbursement of the state’s counterpart funds to guarantee good quality of the supplementary immunization activities. The Regional Director also encouraged the Federal and State Governments to continue meeting the financial commitments to sustain the momentum in polio eradication efforts.

The President on his part, commended the significant contributions of WHO, development partners, and the Global Polio Eradication Initiative (GPEI), a public-private partnership leading the effort to eradicate polio, and described the announcement as a ‘historic achievement’ in global health.

While he joined other Nigerians and the global community in applauding Nigeria’s removal from the list of polio-endemic countries, President Buhari assured Dr Moeti of continued vigilance and stated that the  “Federal Ministry of Health was given a clear directive to come up with measures for enhanced effort towards ensuring the sustenance of a polio-free Nigeria”.

President Buhari also committed that the government will sustain the needed funding for operations and vaccine procurement for the programme. Also, the Presidential Taskforce on Polio Eradication will be reconstituted under the leadership of the Federal Ministry of Health to provide political direction and oversight in order to avoid complacency and ensure certification by 2017.

The official ceremony was attended by the Permanent Secretary of the Federal Ministry of Health, WHO Country Representative in Nigeria, traditional and religious leaders as well as representatives of key GPEI partners.