WHO extends support towards Tuberculosis Diagnosis in Uganda 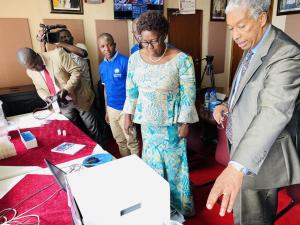 WHO extends support towards Tuberculosis Diagnosis in Uganda

Kampala, 16 December 2019: The Speaker of Parliament, the Right Honourable Rebecca Alitwaala Kadaga received a Tuberculosis (TB) GeneXpert machine from the World Health Organization (WHO) to improve TB testing and diagnosis among key populations in prisons.

The GeneXpert machine was delivered by the WHO Representative Dr Yonas Tegegn Woldemariam who said that the machine will increase rapid diagnosis among key populations such as prisoners and HIV & AIDS patients thus contributing to the achievement of the global and national TB goals.

The TB GeneXpert testing machine is a highly accurate (close to 90%), rapid new test for diagnosis of TB based on DNA technology. The machine is automated and can be operated by a lay health provider with minimal training of just 1-2 days. It is able to provide results within three (3) hours indicating the presence of TB in a collected sample-which is usually sputum, and whether the TB germ is sensitive to the first-line (common) medicines used for TB treatment.

This, in turn, helps to rapidly detect patients suffering from multi-drug resistant TB and to promptly initiate appropriate treatment.

While receiving the GeneXpert machine, the Right Honourable Speaker of Parliament said that the support will improve management of Tuberculosis among the prisoners. "This machine will make a difference in diagnosis, treatment and turn around time in the management of TB," she said.

She further pointed out that TB is not only among HIV patients but also prisoners who are among the most-at-risk populations. “This timely support from WHO will indeed go a long way in addressing the TB problem among these key populations,” she said

Similarly, the WHO Representative Dr Yonas re-echoed the Speaker’s sentiments and concerns about the TB scourge among prisoners. He noted that usually, many go without being tested and thus miss out on proper diagnosis and treatment.

Laboratory confirmation of TB is critical to ensure quality medical treatment and care. Traditionally microscopy has been the main test for TB in Uganda, however, TB microscopy misses nearly half the of the patients with TB, especially those who have both TB and HIV.

"In Uganda, 65% of the people who develop TB annually are detected, and only half of those have a laboratory-confirmed diagnosis of the disease," Dr Yonas noted.

The main drivers of TB in Uganda are HIV, undernourishment, and alcohol abuse. Furthermore, men typically aged 35-44 years, and the most economically productive age-group in society contribute more than double of the cases (males 64% versus women 24%). TB also affects children, and these contribute 12% of the detected TB cases in the country.

However, besides men and children, the following population groups are especially vulnerable, underserved, or are at risk of TB infection and illness, and would benefit highly from GeneXpert-based TB diagnosis. These include Prisoners, Refugees and people living in urban slums. 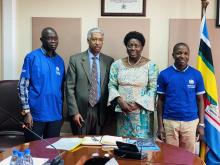