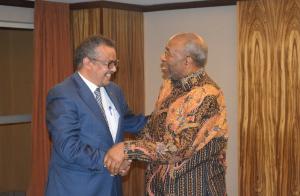 Kampala, 16 August 2018: The Director General of the World Health Organization Dr Tedros Adhanom Ghebreyesus and the WHO Regional Director for Africa, Dr Matshidiso Moeti visited Uganda on their way from the Democratic Republic of Congo (DRC) to assess the Ebola Virus Disease (EVD) response. They were received by the WHO Representative in Uganda, Dr Yonas Tegegn Woldemariam who briefed them on WHO support to the operational preparedness of Uganda to respond to an outbreak.

Dr Yonas informed them that the Ministry of Health with support from partners including WHO have deployed preparedness teams in the five high-risk districts of Uganda that share a border with DRC. These include Bundibugyo, Hoima, Kabarole, Kasese and Ntoroko.

The teams deployed comprise of experts in case management, community engagement, health promotion and surveillance. Additionally, Dr Yonas pointed out that WHO has deployed two Ebola Kits as well as logistical support.

On the same day, Dr Tedros held a meeting with the Minister of Foreign Affairs, Hon. Sam Kutesa on Uganda’s EVD preparedness and discussed WHO support and priorities for actions.

Dr Tedros applauded Uganda for responding fast and effectively to prevent the outbreak from spreading into the country. He further highlighted that outbreak response is an important aspect of WHO and committed the support of all levels of the organization in the preparedness response.

Dr Tedros was particularly concerned about the insecurity in Ituri Province of DRC, the epicentre of the outbreak, which is hampering WHO response activities. He, however, hoped that the conflicting sides in DRC will respect international law and allow WHO and partners to access all areas in order to contain the Ebola outbreak.

Similarly, in remarks she made at Entebbe Airport, Dr Moeti commended Uganda for its timely preparedness and response, reminding the officials of the porous borders between Uganda and Congo which need strong surveillance and border screening. She committed the WHO Regional Office for Africa to support Uganda in its operational preparedness working with the Ministry of Health. 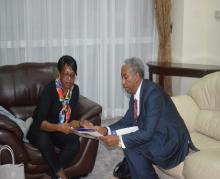