WHO briefs Diplomats on Ebola Preparedness and Response activities in Uganda 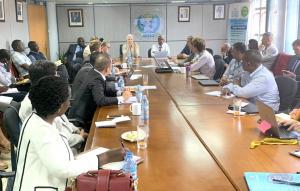 WHO briefs Diplomats on Ebola Preparedness and Response activities in Uganda

Kampala, 26th April 2019: - The World Health Organization (WHO) Representative Dr Yonas Tegegn Wodermariam and staff recently briefed ambassadors and heads of bilateral and multilateral organizations in Uganda on the current Ebola situation in the Democratic Republic of Congo (DRC) and the preparedness activities implemented in the country since August 2018.

In the briefing held at the WHO Country Office, Dr Yonas informed the diplomats that the Ebola Virus Disease (EVD) outbreak in the Democratic Republic of Congo continues to escalate. As of 23rd April 2019, a total of 1,353 cases (1287 confirmed and 66 probable) including 880 deaths had been recorded.

He added that the current outbreak situation in the DRC makes it increasingly likely for Uganda to import EVD cases. This has put the Ministry of Health supported by partners on heightened alert by implementing various preparedness activities since August 2018. It is this preparedness that constituted the briefing by WHO to the partners.

Active case search and surveillance is one of the main activities being implemented aimed at ensuring that no case is missed in the health facilities or in the community. Accordingly, 26 districts considered to be at high-risk of EVD have been covered now have capacity in contact tracing and surveillance.

Since August 2018, heightened surveillance has resulted in screening of over 6 million people for EVD at border Points of Entry (PoEs) located in several districts and at Entebbe International Airport. Vigilance and active contribution of the trained surveillance teams have led to identification and investigation of 560 alerts EVD as of today.

In EVD outbreaks, Infection Prevention Control (IPC) in health facilities and communities is the main barrier for prevention of amplification of transmission of the infection and it is a key determinant on how fast the disease spreads, is controlled and eventually stopped. It has been a major area of focus for MoH, WHO and partners with the IPC committees revived in 562 health units in 22 districts. A total of 9,806 health workers in 22 districts have also been mentored on recommended IPC practices and Standard Operating Procedures and can ably adhere required IPC measures.

Chlorine mixing into appropriate concentrations which is an effective disinfectant in EVD outbreak has been strengthened with the training of 301 health workers in 61 health facilities. In addition, all health facilities including PoEs in the Rwenzori sub-region have been stocked with IPC supplies.

Laboratory capacity has also been enhanced and now health workers in 24 districts are able to safely collect, package and transport EVD samples to the Uganda Virus Research Institute (UVRI) for investigation. USAID has supplemented this component with provision of ten complete 500 module VHF kits which are pre-positioned in Kampala in readiness for a response. WHO has provided an additional 10 abridged kits that are currently used to support alert management and drills.

Regarding EVD vaccination, 4,420 frontline health workers have been vaccinated against the disease in 13 districts. The government has recently issued a new permit to WHO to import an additional 3,000 doses of EVD vaccine to cover more frontline health workers considered to be at high risk. The country also now has 13 trained national vaccination teams ready to offer the service anywhere in the country including during actual EVD response.

Capacity for psychosocial support has been strengthened with the training and deployment of 404 health workers in 13 districts. Furthermore, 180 and 526 health workers in 17 districts have been trained on Safe and Dignified Burials (SDB) and case management respectively.

In the high-risk districts, ten Isolation Units have been built and equipped ready to receive patients. Indeed, most of the reported alerts cases mentioned above including the ten cases of confirmed cases of Crimean Congo Hemorrhagic Fever have been managed in these units. Two more isolation units are under construction in Kihihi and Kisoro Hospitals. SDB burial teams have been trained in 17 districts and eight ambulances have been procured and are on standby in the districts.

For community-based responders, WHO and partners have trained 6,417 Village Health Teams (VHTs) members; 4,751 community leaders; 1,463 sub-county councillors, 330 religious leaders; 256 traditional healers; and 2,693 local council I chairmen in 17 districts on community-based disease surveillance and community engagement.
Similarly, UNICEF has supported the orientation of 611 teachers in 243 schools in Kisoro district on EVD prevention, detection and control. These and other influential people have managed to visit 333,021 households sharing EVD messages.

In addition, WHO, UNICEF and Uganda Red Cross Society have produced 18,000 job aids on EVD used by VHTs and other community mobilisers. These have been complemented by 21,635 radio spots and 354 radio talk shows have been produced and aired on 21 radio stations. These partners have also supported the production of 724,193 posters and 883,627 leaflets on EVD messages in local languages and in English. Over three million people have been reached directly with EVD prevention messages through home visits, community meetings or one-on-one counselling sessions.

However, despite all these efforts, there is still a lot to do. As Dr Yonas pointed out, “the cost of response in case Uganda gets EVD cases is far higher than that of preparedness. A lot has been done, but we need to support the government to even do more within the existing health system” he said. He, therefore, urged the diplomats to support the new Ebola Preparedness and Contingency Plan that is under development.

The USA ambassador to Uganda, Her Excellency Deborah Ruth Malac acknowledged that the outbreak in the DRC is not yet in the right direction but cautioned against “over preparedness” which should not negatively affect the management of other diseases in the country. She appreciated WHO and partners for the good work and called for more support and vigilance to contain the outbreak right in DRC.