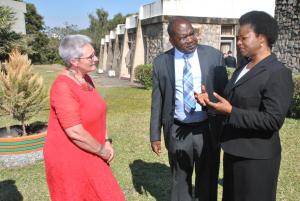 The WHO Country Office in collaboration with the Ministry of Health convened a meeting to engage parliamentarians in a discussion on how they could support and contribute to the implementation of the WHO Framework Convention on Tobacco Control (WHO/FCTC). The meeting which took place on 27 June 2018 at parliament buildings in Lusaka was intended to raise awareness on the WHO/ FCTC and the WHO/ FCTC 2030 project including Zambia’s obligation to align its domestic tobacco control legislation with the requirements of the treaty. It was also aimed at engaging parliamentary committees to discuss their support and contribution to the implementation of the WHO/ FCTC.

This meeting was one of the activities undertaken during the WHO FCTC 2030 project mission to Zambia from 18 - 29 June 2018 by the WHO/ FCTC Secretariat, WHO Regional Office for Africa, UNDP, the International Legal Consortium including representation from American Cancer Society and Economics of Tobacco Control Project at The University of Cape Town.   . The mission also supported the development of the Tobacco and Nicotine Products Control Bill 2018, disseminated the Joint Needs Assessment Report of 2017, commenced initial work on the development of the Investment Case for Tobacco Control in Zambia and held bilateral consultative meetings with line ministries and other partners and stakeholders to discuss critical issues particularly, the enactment of legislation, tobacco taxes, smoke-free environments, agricultural alternatives to tobacco farming, among others.

In her speech to officially open the meeting, the Vice Speaker of the National Assembly, Ms Catherine Namugala said that the statistics on the prevalence of tobacco use and related deaths were extremely worrying. She said that the sensitization and engagement of parliamentarians was timely because as leaders, advocates and law makers they were change agents and had a key role to play in tobacco control. She called upon parliamentarians to take an active role in the fight against tobacco in order to prevent tobacco use related diseases such as cancer and heart disease and emphasised the need to protect young people.

Speaking at the same occasion, the Minister of Health, Dr. Chitalu Chilufya, stated that implementing the WHO FCTC was very important because its objective was to protect current and future generations from the devastating health, social, environmental and economic consequences of tobacco consumption, nicotine addiction and exposure to tobacco smoke. The minister said that his ministry had a key role to protect public health in order to foster national development in line with the Vision 2030. He reiterated government’s commitment to tobacco control using a multi-sectoral approach and to enactment of legislation which was fully compliant with the provisions of the treaty in line with the SDG 2030 agenda.

Speaking on behalf of the UN in Zambia, the WHO Representative Dr. Nathan Bakyaita stated that the global tobacco epidemic killed nearly 7 million people each year, of which more than 890 000 were due to exposure to tobacco smoke. He said that tobacco control was part of the SDG 3 aimed at ensuring healthy lives and promoting well-being for all at all ages, particularly target 3.a on strengthening the implementation of the WHO/FCTC. He thanked the WHO/FCTC Convention Secretariat for undertaking a Joint Needs Assessment for Tobacco Control, supporting the drafting of the Tobacco Control Bill 2018 and providing funding for accelerating the implementation of the treaty. Dr. Bakyaita reiterated WHO’s commitment to supporting the MOH and the entire government to fulfil the treaty’s obligations.

In her key note address, Patricia Lambert, director of the International Legal Consortium laid emphasis on the preventable burden of disease as a result of tobacco use and why the WHO/ FCTC was best suited to fight the tobacco epidemic because it is evidence based. Ms Lambert stated that although Zambia acceded to the treaty in May 2008,  it lagged behind in implementing the treaty especially the time bound measures and had not fully domesticated the treaty. Moving forward, Ms Lambert urged government to fulfil its obligations to enact the tobacco control bill of 2018 in order to promote the health of Zambians.

The one day programme provided an opportunity for parliamentarians to understand and discuss various issues including: the global tobacco epidemic, tobacco control in the African Region, the prevalence of tobacco use in Zambia, the findings of the International Tobacco Control (ITC) Survey for Zambia and the implications, tobacco control efforts in the country including achievements and challenges. The parliamentarians were also oriented on the WHO/FCTC and the WHO FCTC 2030 project and the link to the Sustainable Development Goals.
The meeting at parliament was attended by officials from the Ministry of Health, representatives from UN agencies, Civil society, development partners and the media.
.