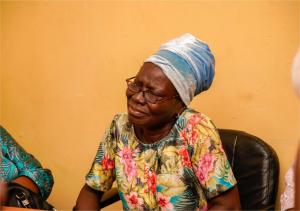 Abuja, 18 December, 2019 - Mrs Mojisola Shotola is a Government trained traditional birth attendant (TBA) with over 40 years of experience and a force to be reckoned with, in the fight against polio and other vaccine preventable diseases in her community.

“I help mothers to deliver roughly eight to 10 babies every month, and as soon as the babies are born, I accompany my patients to primary healthcare facilities to ensure the newborns receive their first dose of oral polio vaccine, hepatitis B and every first dose vaccine necessary,” says Mrs Mojisola Sotola.

“I also encourage all my patients to strictly adhere to the national routine immunization schedule and caution them of the dangers of not following up with immunizing their infants. Immunization to me is very important, I have seen what ignorance has done to many families”, she added.
People like Mrs Sotola can be described as unsung heroes in the fight against polio and vaccine preventable disease.

Indispensable role of TBAs
In Nigeria, particularly, in the South West, South-South and parts of the North-East, many women still prefer to give birth at home, in the presence of a TBA than in a hospital. When the Lagos State Government recognized how significant TBAs were in communities, at least 10,000 TBAs were registered in various Local Government Areas (LGAs), trained and certified as ‘Community Birth Attendants’. Every month, the Local Immunization Officer (LIO), Mrs Bola Komolafe organizes trainings for the TBAs on immunization, broadening their knowledge on particular polio like symptoms and what to do in such instances. In addition, the TBAs are also trained to track and report routine immunization defaulters.

In efforts to intensify routine immunization and Acute Flaccid Paralysis (AFP) surveillance, the World Health Organization (WHO) in collaboration with the Lagos State Government trained over 1880 community health informants in AFP surveillance and other major symptoms of vaccine preventable diseases in 2019.

“Upon completion of the training, the TBAs are given maternity kits consisting of all the crucial tools needed in neo-natal care. TBAs are also encouraged to work with community informants and surveillance officers, notifying them of any strange symptoms detected in pregnant women, newborns or young infants in their communities”, states Mrs Christiana Oladipupo, the Disease Surveillance Notification Officer (DSNO) of Mushin LGA.

Acknowledgement of VPDs heroes
Impressed with results from the WHO-led intervention, Professor Rose Leke, the Chair of the Africa Regional Certification Commission (ARCC) for the eradication of Poliomyelitis said, “I am truly impressed with the level of knowledge displayed by the community birth attendants I met. It is refreshing to see the impact this intervention is having in communities and I am sure with the type of determination and passion these women hold, Nigeria and the Africa region is on track to eradicate polio and beat as many vaccine preventable diseases”.

Recalled that, ARCC had invited Nigeria to present its final documentation to receive a wild polio-free status in June 2020. In this light, the ARCC embarked on two field verification visits. The first is to the Southern States, including Lagos and Oyo State, from 09 to 20 December 2019 and the second is scheduled for the Northern States, from 02 to 13 March 2020. 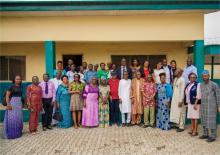