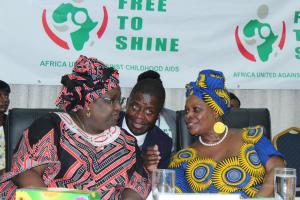 The United Nations in Zambia has welcomed the launch of the Zambia Ending AIDS and Free to Shine Campaigns by the First Lady of the Republic of Zambia, Mrs Esther Lungu which took place on the 11 of April 2019 in the City of Livingstone. The “Free to Shine campaign” is an initiative of the wives of African Heads of State who have come forward to end Child AIDS and keeping mothers alive as part of their contribution towards the global goal of ending AIDS as a public health threat by 2030.

In a speech made on behalf of the UN in Zambia, the WHO Representative, Dr. Nathan Bakyaita said that the United Nations welcomed the Zambia Ending AIDS and the ‘Free to Shine’ campaigns and that it was in full support of the scale up of HIV prevention and elimination of mother-to-child transmission (eMTCT) programmes. He said that ending the AIDS epidemic required sustainable investment towards Universal Health Coverage by ensuring that all people had access to needed health services. Dr. Bakyaita said that the UN was committed to working with government and other partners to accelerate progress on eMTCT and ending AIDS.

The First Lady of the Republic of Zambia, Mrs Esther Lungu is championing the Free to Shine campaign in Zambia under the umbrella of the Zambia Ending AIDS Campaign. In her official message to launch the campaigns, she recognised the great strides which the government and its partners had made in the fight against HIV and AIDs. However, she said that if the country was to attain epidemic control and score a Zero by 2030, there was need to work harder and to strengthen partnerships. She bemoaned the fact that  90 percent of children who had HIV got it through Mother to Child Transmission and that only 55 percent of these children were on life saving medicines. The First Lady said that she was committed to support the scale up of the elimination of mother-to-child transmission programmes through the Free to Shine campaign.

At the same function, The US Ambassador to Zambia, H.E. Mr. Daniel L. Foote stated that the US government was committed to the Fight against AIDs and continued to support countries through PEPFAR. He emphasized the importance of HIV testing, the removal of stigma and access to treatment including male involvement in HIV and AIDs programmes.

The First Lady of Mozambique, First Lady of Botswana, the Representative of the First Lady of Zimbabwe and the Organisation of African First ladies for Development (OAFLAD) Executive Secretary were present in Livingstone to give support and solidarity messages to the First Lady and the people of Zambia. They joined the First lady of the Republic of Zambia in unveiling of the Zambia Ending AIDS and Free to Shine campaigns plaque.

Present at this event were : The Provincial Minister for Southern Province, The Mayor of the City of Livingstone, The US Ambassador to Zambia, Heads of UN Agencies (UNICEF, UNFPA, UNAIDSand WHO), Senior government officials, Local chiefs, Partners and Stakeholders, the media and community members.