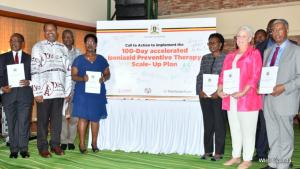 Kampala, 4th July 2019: - The Minister of Health, Dr Jane Ruth Aceng, launched a 100-Day Accelerated Scale-up plan for Tuberculosis Preventive Treatment (TPT) targeting over 300 000 People Living with HIV and AIDS (PLHIV) in Uganda. The government will also provide TPT to all children aged 12 months or more living with HIV as well as HIV-negative infants and children aged 5 years or below who are household contacts of patients with pulmonary Tuberculosis. As part of the scale-up plan, Government will provide TPT at 1 947 Antiretroviral therapy (ART) sites across the country.

TB preventive Treatment (TPT) is offered to individuals who are at risk of developing TB disease. Such individuals are infected with the bacteria that causes TB but show no clinical signs or symptoms of TB.

During the launch, Dr Jane Ruth Aceng said that Uganda bears unequal burdens of HIV and Tuberculosis. “For the HIV epidemic, the Ministry of Health and partners, have over time implemented HIV prevention and treatment interventions that have resulted in a significant epidemic contraction in the last five years,” she said. “For instance, the number of new infections was estimated at 53 000 in 2018 compared to 130 000 in 2010. AIDS-related deaths also declined to 26 000 in 2018 down from 60,000 in 2010,” Dr Aceng noted.

She, however, noted that the achievements made, contrast with the big burden of tuberculosis that continues to be reported in the country and added that TPT will play a key role in reducing the rates of TB infections among PLHIV and under- 5 children TB contacts.

The United States (US) Ambassador to Uganda, Ms Deborah Malac commended the country on raising awareness about TB among PLHIV and investing resources to mitigate the challenge. She noted that TB remains a big burden among PHLIV, leading to death.

Ms Deborah, thus informed everyone that the US government is committed to tackling TB in general and especially among PHLIV, “we will continue to invest resources to tackle the TB scourge in Uganda.”

In his remarks, the World Health Organization Representative in Uganda, Dr Yonas Tegegn Woldemariam similarly lauded the Government of Uganda for scaling up TB prevention treatment for PLHIV. He said that TB is the leading cause of death among people living with HIV, “in 2017, for example, TB was responsible for 32% of the 940 000 lives lost to HIV, globally,” he noted.

Dr Yonas further said that later this month, the WHO will convene a Guideline Development Group (GDG) to update the existing guidelines on TPT that are needed for programmatic management of hidden tuberculosis infection.

Despite the adoption of global TPT guidelines, Uganda has only been able to reach 16% of the PLHIV with this life-saving intervention. Two-thirds of the people were reached after the country renewed its commitment to prioritize TB diagnosis, treatment and prevention during the UN High-Level Meeting held in New York in September 2018.

However, Uganda is still facing a dual epidemic of TB and HIV despite 13 years since the first TB/HIV collaborative policy was developed with 40% of the TB patients testing HIV positive, and 35 per 100 000 people dying with TB and HIV. Similarly, an estimated 14 000 TB-related deaths among HIV positive individuals occurred in Uganda in 2017.

The above thus created the need to scale up TPT in order to reduce the deaths due to TB among PLHIV.