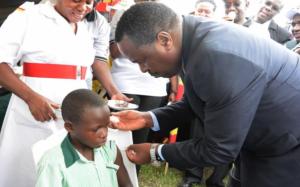 Dr. Elioda Tumwesigye, Minister of Health who represented the First Lady of Uganda Hon. Janet Kataha Museveni as the guest of honour expressed his gratitude for this significant achievement. He said that 850000 children in Uganda were to be covered by the vaccination exercise and further affirmed government’s commitment to this exercise. Dr. Elioda also said that the government would apply WHO recommendations on cervical cancer control.

Pointing out cervical cancer as one of the leading causes cancers and causes of death among women world over, Dr. Elioda encouraged parents not to miss out on the ‘great opportunity’ of having their children immunized.

He also stressed the risk factors of cervical cancer and one of them was sexual contact, especially unprotected sex with many partners and cautioned the people against irresponsible sexual behavior.

He further said that the primary prevention of cancer of the cervix is vaccination and all girls should be vaccinated. Dr. Elioda concluded his remarks by thanking government partners in health, World Health Organization for its rich technical advice, United Nations Children's Fund, PATH and the Immunization team at the Ministry of Health for a job well done.

Dr Jane Ruth Aceng, the Director General of Health Services, noted that this is a great stride by the Ministry of Health in providing HPV vaccine to all girls nationwide within the age of 9-13 years as recommended by WHO, and that the government has decided to begin with the cohort of 10 years.

She also mentioned that vaccines are provided free of charge, although she had learnt of some health workers who are charging for the vaccine but said that would be checked and called upon the population to alert the Ministry whenever the encounter any case of being charged for vaccines.

The host, Minister of Defense and Member of Parliament Kasese Municipality, Hon. Chrispus Kiyonga welcomed delegates to his region and thanked his community for the warm reception. He also thanked Ministry of Health for choosing Kasese district as the host to the launch of the HPV vaccine, calling on local leaders to ensure that the girls in the region are immunized.

Representing the Country Representative, Andrew Bakainaga, Country Advisor Immunization and Vaccines Development at WHO Country office delivered a joint statement on behalf of the United Nations Family. He congratulated Uganda upon the milestone and further said Human Papillomavirus (HPV) is the most common viral infection of the reproductive tract, saying “most sexually active women and men will be infected at some point in their lives and some may be repeatedly infected.”

He also highlighted the support WHO has provided to the government of Uganda by introducing cancer of cervix-screening in regional hospitals like Gulu, Arua, Soroti.

WHO recommends a comprehensive approach to cervical cancer control through the following means:

The event was  well-attended by government officials, partners; WHO, UNICEF, Clinton Health Initiative (CHAI) and PATH, district leaders, religious leaders as well as school children who turned up in high numbers to get immunized.