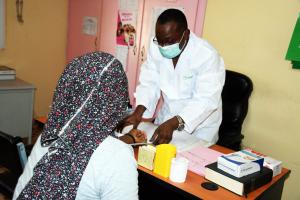 Ouagadougou – Hesitancy to get tested, avoiding contact tracers or wariness of what the neighbours will say: the COVID-19 pandemic has triggered a variety of reactions among some Ouagadougou residents that have complicated timely response.

When the country’s COVID-19 rapid response team tried to reach out to a man who had been in contact with a patient taken for treatment at a Ouagadougou hospital, he shifted from refusing to take calls, to promising to show up for testing and to suggesting that the team comes to his house only at night.

“He said that since we went to his house to take samples, even before the test results were known, no-one came to visit them again. Everybody was staring at them strangely. It was really difficult for them,” says Safiatou Ouedraogo, coordinator of the rapid response team at the Centre Medical Urbain in Ouagadougou.

COVID-19 is a new virus and the fear of the unknown drives stigma about the disease and can cause people to hide their illness. Fear can also hold people back from seeking immediate health care or observing preventive measures.

Days of determined negotiations is what it sometimes takes for response teams to visit families when a family member tests positive for the virus. But even then, some refuse to reveal their addresses, preferring to turn up at a treatment centre instead. “Due to stigma, people would rather not have the rapid response team show up at their house,” Ouedraogo explains.

She recounts that among some families, each visit requires fresh negotiations to allow the response team to follow up on contacts or disinfect their compound. “We realized that the neighbours’ reaction towards the (affected) family every time we came to take samples opened new wounds,” she says.

Once a home guard who contracted COVID-19 refused to give his own address, preferring that of his work station and attempts to reach the people he might have come in contact with were fruitless, recounts Ouedraogo.

Barthelemy Marie Ludovic Ouedraogo, a school principal and a cleric, says while suffering persistent fever he began taking precautions such as avoiding sharing utensils and attending mass with colleagues, but he did not reveal to them that he was feeling ill until he went to an isolation centre. “I was really worried for them.”

Setting up centres where people who suspect they have caught the virus can go for testing rather than have home visits by the rapid response teams could ease the stigma and fear, Safiatou Ouedraogo suggests, also pointing out that increasing public education campaigns and the use of the psychosocial care units in health centres are helpful steps.

The World Health Organization (WHO) is working with the government to provide guidance to tackle stigma as well as support other aspects of the COVID-19 response, says Dr Fousseni Dao, who represents WHO in the national COVID-19 response cluster in charge of treatment.

Dr Brice Bicaba, the national COVID-19 response coordinator, acknowledges that not only are patients stigmatized, health workers, especially those in COVID-19 treatment centres, are also shunned by their communities who fear that their jobs have put them at a higher risk of contracting the virus. He also points out that involving people who have recovered from COVID-19 in public information and education campaigns as well as providing psychosocial support are some of the measures being deployed against stigma.

“We’re hopeful that all this will help reduce the problem,” Dr Bicaba said.