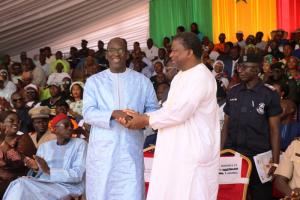 Banjul, 9 May 2019:The 5th of May 2019 was a momentous occasion in the fight against malaria for both The Gambia and Senegal. Both countries successfully launched a synchronized Long Lasting Insecticide Bet Net (LLIN) Campaign at Kerr Ayib a border town between The Gambia and Senegal. Regional Governors from the two adjacent Regions, Ministers of Health, Religious and cultural leaders, Partners and UN agencies from both The Gambia and Senegal took part in this historic occasion which also formed part of the World Malaria Day 2019 commemoration under the theme “Zero Malaria Starts with Me.”

Malaria indicators in both countries have declined considerably with a current (2017) prevalence of <0.4% for Senegal and 0.4% for the Gambia in children under five years of age. The early prioritization of the borders areas with this synchronized bed net distribution campaign is therefore envisaged to shorten the usual long tail of elimination along borders as both countries continue to push down the incidence and prevalence of malaria.

The commitment of the Heads of States, His Excellences President Macky Sall and President Adama Barrow through their Ministers of Health, Hon. Abdoulaye Diouf Sarr (Senegal) and Hon. Dr. Ahmadou Lamin Samateh (Gambia) was very encouraging. Both of Ministers emphatically described malaria as a “health burden and stressed that sustaining malaria control efforts is an investment in development.” They also advised the need to cooperate and coordinate with partners to develop evidence-based cross-border control strategies and initiatives, including resource mobilization to sustain the initiative from the two governments, local and international donor partners.

In a joint statement representing WHO Senegal and Gambia, Dr. Lucile Imboua conveyed the WHO Regional Director for Africa, Dr. Matshidiso Moeti’s message.  She stressed the theme for World Malaria Day 2019 “Zero Malaria Starts with me,” as a slogan to empower individuals to make a personal commitment to saving more lives, and help communities and economies to thrive by eliminating malaria.

She called for renewed political commitment to eliminate malaria and for increased investments on malaria prevention and control and urged governments to mobilize all necessary internal and external resources, and ensure intersectoral and cross-border collaboration. Dr. Lucile Imboua thanked the two governments and partners and assured them of WHO’s continued support towards the elimination of malaria.

Statements were also made by the Global Fund Regional Director for West and Central Africa, Representative of USAID/PMI and the CRS Country Representative for Senegal and The Gambia.