Surviving Ebola and passing final school exams while in treatment isolation: Now bring on the future 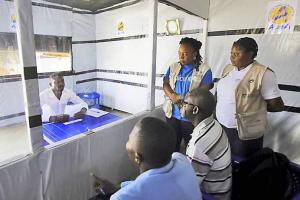 Surviving Ebola and passing final school exams while in treatment isolation: Now bring on the future

Days before the most important exams of his life – the exams that would determine the course of his future, Claude Mabowa’s older sister tested positive for Ebola

Then, one after another, his mother, a younger brother and his uncle’s wife also tested positive.

Claude, 21 and consumed with worries about his impending high school final exams and applying for university, wasted no time. He went immediately to an Ebola treatment centre and asked for an exam that would save his life. Another younger brother followed two days later.

He was promptly put into isolation and started on treatment because, indeed, he also tested positive.

Even though it meant he would likely miss his high school final exams and thus jeopardize his university plans, that hasty decision to seek treatment likely is what has given Claude and his brother a future to still plan for.

“Coming early for treatment is really essential,” says Dr Thierno Balde, coordinator of the support team from the World Health Organization Regional Office for Africa. “People who want to survive, they need to come as quickly as possible to an Ebola treatment centre. The survival rate has been really high – today, we have many assets. The new drugs have demonstrated full effectiveness for treating the disease.”

But then a different sickness took hold as Claude thought about the exams he would now be missing and worried his life would become a series of missed opportunities. “I was a bit anxious and was wondering how long the treatment will take so that I do not miss the exam,” he recalls.

His mother, although overcome with Ebola symptoms, managed to talk with the school officials from her isolation room, asking why couldn’t her son still take the exams – special circumstances call for special measures, don’t they? Staff from Alima Administration and UNICEF providing psychosocial support sought out the Ministry of Education for approval. His school officials began making arrangements.

The final exams were to be in two parts. The first half – known as the jury in the baccalaureate system – would take place while he was in isolation. Three weeks later would come the four-day general exam. If he survived, he would have one week after leaving the treatment centre to prepare for the second part.

For a student wanting to study while in isolation, it can be tough. “The first week was difficult. I had fever, lack of appetite and even spent four days not eating food. After a week, I began feeling well,” says Claude.

A former isolation patient working in the treatment centre agreed to bring Claude his study papers. He had four weeks to prepare. “I studied lessons and exercises sent by my schoolmates through WhatsApp on my phone,” he says.

The jury exam is given over three days, one test per day. While his schoolmates were sweating out the exam in their classroom, Claude sat alone but under the supervision of a teacher assigned by the Ministry of Education, who stood outside the glass partition of the isolation unit.

The completed exam papers were scanned and emailed to the examination board.

After nearly five weeks in the treatment centre, Claude walked out Ebola free. His younger brother had left a week earlier. Their grandfather took them home. The other family members had not survived, including his mother.

Claude had a week remaining until the general exam. Despite the overwhelming grief, his schoolmates spent four days coaching him. They then all sweated out the exam together in their school. A month later, he learned he passed.

Without passing, university admission would have been impossible. “Frankly, I do not know how I would have stood the loss of my mother and brother with a failure in this exam. The success was like a soothing pain relief,” he says.

“I still remember the day he succeeded his exam: We were very happy and rejoiced together with other students because Claude broke the stigma of people who think that the ETC is a real hospice, a death place,” recalls Wabene Chirak, Headmaster of Claude’s school. “Thanks to the story of [Claude], now all the students here and in the surrounding places are aware that everybody can get Ebola and get healed and have a normal life.”

For Claude and his brother, it will be a new normal, with his home life forever changed by the Ebola virus disease. He and his brother now live alone, together. “I was full of joy and excited after I succeeded in the exam. That diploma helped me address the stress of the loss of my family members,” he says.

He is considering political science or the law at a university in Kinshasa or Kisangani, although managing the entrance fees now becomes his next hurdle. In the meantime, Claude is now among 15 survivors recruited by UNICEF to reach out to communities in Kanzuli n’zuli in the Beni health zone in north-eastern DRC with first-hand information that will help “save lives of my community members and break down reluctances and stigma”.