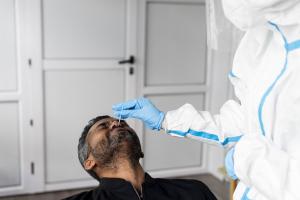 Brazzaville – COVID-19 cases in the African region have risen steadily over the past two months, underscoring the need for reinforced public health measures to avert a surge in infections, particularly as people gather or travel for end-of-year celebrations.

Since mid-October, an average of 46 000 cases per week have been recorded in the 47 countries in the World Health Organization (WHO) African region compared with about 29 000 cases per week between early September and early October. Ten countries in the region have reported the highest number of cases, accounting for 88% of new cases in the past month. However, seven countries have recorded a steady decline in cases over the past four weeks.

Increased movement and interactions as well as slack observance of public health measures such as physical distancing and wearing of masks are some of the factors behind the upsurge in cases. Gatherings such as political rallies or in close settings have also contributed to the rise in infections.

“The rising COVID-19 infections and the holiday season present a worrying mix,” said Dr Richard Mihigo, the Immunization and Vaccine Development Programme Coordinator at WHO Regional Office for Africa. “Preventive measures must be tightened up to not only limit the risks of infections during the festive season but stand as permanent barriers against the spread of COVID-19. Complacency has no place in the fight against this pandemic.”

While many countries have improved COVID-19 response, including diagnosis, testing remains low across the region. In the past four weeks, only eight countries surpassed the critical benchmark of carrying out at least 10 tests per 10 000 population per week. Testing is crucial to understanding the pandemic trend and guiding response.

Over the recent months, lockdowns and movement restrictions instituted by many governments in the region have been eased. To strengthen COVID-19 response as cases are reported in many locations, WHO is urging countries to carry out assessments at the subnational level and identify high-risk areas so that local governments can adjust their public health measures accordingly and be agile in their decision-making.

“Trying to revive economies and livelihoods devastated by the pandemic while striving to limit the spread of COVID-19 is a very tough balancing act,” said Dr Nsenga Ngoy, the Emergency Response Programme Manager at WHO Regional Office for Africa. “But we cannot emphasize enough how important it is not to let our guard down. The likelihood of an increase in cases in the coming weeks can be averted by doubling down our efforts.”

WHO continues to support countries to maintain strong public health measures, decentralize response and step up preparedness for the rollout of COVID-19 vaccines as soon as they become available.

Dr Mihigo and Dr Ngoy spoke today at a press conference by WHO. They were joined by Mr Thabani Maphosa, Managing Director of Country Programmes, Gavi, the Vaccine Alliance.