South Sudan declares the end of its longest cholera outbreak

South Sudan declares the end of its longest cholera outbreak

Juba, South Sudan, 07 February 2018 – South Sudan declared the end of its longest and largest cholera outbreak on Wednesday (February 07), with no new cases of cholera reported in over seven weeks.

The fight against cholera in South Sudan has involved a range of partners working together to enhance surveillance, deploy rapid response teams to investigate and respond to cases, provide clean water, promote good hygiene practices and treat cholera patients.

In 2017 more than 885,000 people at higher risk of cholera were immunized in the first round and nearly 500,000 people also received a second round of the vaccine. Due to security challenges, not everyone was able to receive the recommended two doses, which would significantly decrease their risk of being affected by cholera.

“Cholera is a virulent disease which spreads when hygiene and sanitation are inadequate,” said Evans Liyosi, WHO Acting Representative to South Sudan. “I congratulate South Sudan for resolving to tackle cholera with determination. But cholera is endemic to South Sudan and many risk factors remain. It is important to maintain the ability to detect and respond to new cases.”

The outbreak was declared on 18 June 2016 and spread to many parts of the country, including the capital Juba. By the time the last confirmed cholera case was discharged on 18 December 2017, over 20,000 suspected cholera cases and 436 deaths were reported.

The country is dealing with several complex health emergencies with 5.1 million people in need of health assistance. Armed conflict has forced almost 4 million people to flee their homes.

Nearly 5 million people, more than 40% of the population, are severely food insecure. These challenges place a huge burden on the country’s health system, while the sanitation infrastructure needs further strengthening.

“The achievements of South Sudan’s cholera programme are impressive,” said Mr Liyosi. “But in a few months a new rainy season will begin, increasing the risk of cholera. Together we must stay on the alert for warning signs that could signal another outbreak.” 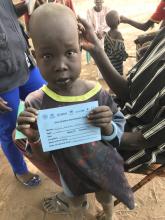