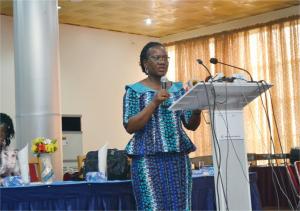 Abuja, 10 August, 2017 - A major survey finding from 2016 Multiple Indicators Cluster Survey/National Immunization Survey Coverage (MICS/NICS) reveals that seventy seven percent (77%) of children aged 12 – 23 months in Nigeria have not received all the routine vaccinations as recommended by the national EPI schedule while forty percent (40%) of children in this age group did not receive any vaccinations putting  it  to be far below the ninety percent (90%) national target that has been set by the country.

Thirty three percent (33%) of children aged 12 to 23 months received three doses of Penta vaccines, while 31% of children who received Penta 1 vaccines did not complete the three dose series.

The survey which was commissioned by the National Primary Healthcare Development Agency (NPHCDA) and conducted by the National Bureau of Statistics (NBS) in cooperation with the State Bureau of Statistics in Kano and Lagos further revealed the inequalities in immunisation coverage with children of younger and less educated caretakers less likely to be vaccinated. Children whose mothers or primary caretakers had secondary or tertiary education were more than five times likely to be vaccinated as children whose mothers had no education or had non-formal education. Children from the households in the richest wealth quintile were also six times more likely to have received vaccinations compared to children from households in the poorest wealth quintile.  The survey also found out that children in rural areas are half as likely to be vaccinated as those in the urban areas. The major reason for not vaccinating children according to the survey according to the survey was the lack of awareness.

Speaking at the MICS/NICS national dissemination meeting with stakeholders on revamping routine immunization and primary healthcare system, the World Health Organization (WHO) Country Representative for Nigeria, Dr Wondimagegnehu Alemu  represented by Dr Rachel Seruyange while extoling the importance of immunisation reducing child morbidity and mortality rates, explained that the NICS  results which  “measure the performance of the immunisation sector between one and two years ago are meant to  assist all the players within the immunisation arena to reflect on the efforts that we have invested and show us how far we need to go to achieve Global Vaccine Action Plan (GVAP)  goals of 90 percent Penta 3 coverage nationally and 80 percent in all the states”.

In his speech at the occasion the Executive Director of the NPHCDA Dr Faisal Shuaib thanked the World Health Organization (WHO), United Nations Children’s Fund (UNICEF), World Bank, Save One Million Live (SOML), Bill and Melinda Gates Foundation, United Nations Population Funds (UNFPA) for the Technical support provided for the survey.

He explained that the NPHCDA, development partners and some state governments have already begun work to reverse the decline in the immunisation sector by declaring a state of public health concern on Routine Immunization. The government, he added has established and inaugurated National Emergency Routine Immunization Coordination Centre (NERICC) with a view to “re-launching, rebranding and rapidly revamping the Routine Immunization performance in the country”. The inauguration of the NERICC and SERICC for states is in line with the current strategic vision of NPHCDA to revamp and strengthen Primary Health Care in Nigeria”.