September 13, will forever be a memorable day for Noreen Koech, 22.

Recently, she watched with tears running down her face as her 6-month old son Elian Koech became a momentous sensation as he led the pack in receiving Kenya’s first dose of Malaria vaccine during the roll out.

Elian was the first of the 10 children lined up for the inaugural malaria vaccination in Kenya in Ndhiwa, Homa Bay County. When the vaccination began, numerous journalists and photographers rushed to get the rare shot, even as dignitaries and guests clapped and ululated in jubilation.

“I knew it was a significant event, but I did not expect all the jubilation and attention given to my son,” she said, adding that her tears were those of joy and appreciation of the moment.

She further said she was elated by the promise that her child and others around him would benefit from the new vaccine which as had been explained to her, would reduce the malaria episodes and the threat malaria brings to the lives of  many children in her home and surrounding areas.

Noreen, who is a trained teacher waiting to find work, said as far as she could remember, malaria had been a cause for constant worry – for parents and adults in the area.  She said Elan had suffered an episode of malaria a month before and that “almost all the time, someone around here is suffering from the disease”.

This vaccination thus, brings great promise and relief for her child and all the children who get it, she added.
Her experience is not isolated. For many families at the malaria prone areas of western Kenya, coastal region and elsewhere, the disease is a constant source of worry and inconvenience among families.

“My grandchild has been admitted five times due to malaria-related illness since the year began,” one grandmother at the Siaya Referral hospital said.
The grandchild was among several children at the pediatric ward of the county hospital recovering from malaria.
At Iguhu County hospital in Kakamega, one third of the under five children (33.8%) who were suspected to have malaria symptoms, were confirmed to have the disease, while at Khunyangu Sub-County hospital in Busia, more than half (51.2) of the  suspected cases had malaria.
“We are very excited about this”, Yvone Ingosi, a mother who watched the news of the launch said. I purposely came to the hospital to find out if it is being offered here and fortunately they have it.”  Her son Bayley, received it at Vihiga County Referral Hospital.

Malaria in almost all hospitals in the region is the top diseases that communities and health workers have to deal with.
“Malaria still remains one of the top 10 causes of death in the country, and a leading killer of children under 5, Cabinet Secretary Hon Sicily Kariuki told guest who had gathered at the launch.  The prevalence has remained high, with an incidence of up to 27% among children aged less than 5 years, especially in the lake region, where the condition is endemic, she added.

The new malaria vaccine, RTS, S, which has already been introduced in Ghana and Malawi brings with it a relief that it will boost existing interventions like nets, insecticide sprays among others.

The vaccine will prevent 4 out of 10 malaria Infections and prevent severe malaria by more than 30 percent, WHO Representative in Kenya, Dr Rudi Eggers said.

“The malaria vaccine introduction and programme, will help us learn more about the potential of this prevention tool to change the trajectory of malaria – a disease that has held Kenya and Africa, its grips for ages” Dr Eggers said.

He said the historic 30-year work done towards achieving a vaccine, “represents a dream come true for many people - scientists, public health experts and leaders, health care workers, community advocates, public and private partners, and the people, children and families who have suffered from the disease. “

The phased introduction has been rolled out in selected eight counties of Homabay, Kisumu, Migori, Siaya, Busia, Bungoma, Vihigo and Kakamega countries. Within the 8 counties, some sub-counties are introducing the vaccine into their immunization schedules, while others expect to introduce the vaccine later.  It will reach 120 000 young children per year, for the next 4 years.
“The phased introduction will inform decision makers about vaccine’s impact in reducing child deaths, vaccine uptake, and vaccine safety in the context of routine use,” Dr Eggers added.

Evidence and experience from the phased introduction will inform WHO policy recommendations on the broader use of the RTS,S malaria vaccine in sub-Saharan African, he added.

It is administered in four doses which will be administered from 6 months and with the last dose given at 24 months.
The introduction of the vaccine, RTS,S as it is known, follows years of clinical trials in Kenya and six other countries in Africa in which the 4000 children who received the vaccine suffered fewer episodes of illness, including severe malaria.

He said the optimum protection from the disease will “demand a combination of tools and actions so we urge all of you to do your part because we won’t achieve our vision for a malaria-free world without you”. 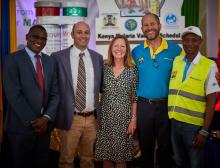 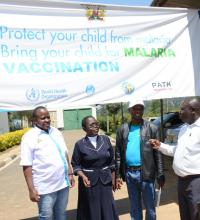 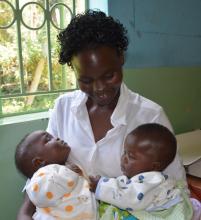 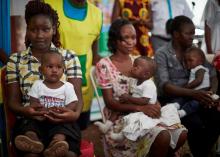