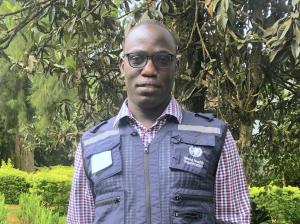 Dr Elhadji Mamadou Mbaye, from the West African country of Senegal, leads the Risk Communications and Community Engagement team for the World Health Organization’s Ebola outbreak response in Butembo in the North Kivu Province of the Democratic Republic of the Congo (DRC). A graduate in political science, he went on to complete a PhD in health policies related to AIDS and migration before heading up the West African Task Force for Emerging and Re-emerging Infectious Diseases and the Social Science and Global Health Research Unit for the Government of Senegal. Candidly admitting his initial reluctance to join the fight against Ebola in the DRC, he recalls how he was overwhelmed by community reluctance to be treated after he arrived in the country and some of the missteps the early outbreak responders made in allaying people’s fears.

I well remember the day I heard about the Ebola outbreak in the Democratic Republic of the Congo. I had worked in community engagement during the West Africa Ebola outbreak of 2014–2016 and was reluctant to get involved again. The situation in the DRC just seemed so complex and unsafe. To be honest, people were scared.

But when I realized how many people were dying and how my experience in West Africa would help, I changed my mind.

When I arrived here in early February 2019, I quickly realized that what worked in Guinea wouldn’t wash in Butembo. The situation was so different that we couldn’t transfer our experiences.

Butembo is a very different environment. It is much more complex. Even though the Ebola outbreak in Guinea had its challenges, here you face a lot more personal risk.

Apart from the specific ethnic group, languages and cultures, here we are dealing with people who have experienced a lot of violence. Some of them still live in [conflict] areas. They may never even have seen a doctor, let alone a foreign one. People are suspicious of authority. They would rather go to a traditional healer or believe the rumours about what would happen to them if they went to an Ebola treatment centre.

Every day, we would encounter resistance, and we wondered what to do.

It became obvious, then, that we would have to innovate and adapt the model we used for community engagement [in Guinea] to a very different reality and complexity and specificity of this particular response.

I have to say that some of the early community resistance was the result of mistakes made by the response teams and the way they behaved in public. Because these teams are generally medical people, they tend to think that the solutions are only biomedical. But when you think about it, 90% of the response is about relationships with the community – all the responders act inside the community, and if you don’t get it right you won’t get very far.

This is where our social anthropologists were a great help. They told us, “Even though Katwa and Butembo are close together geographically, they can be far apart culturally.”

So, we came up with a specific solution for the type of resistance being encountered by each sector in the operation, for example, for surveillance, vaccination, contact tracing, infection prevention and control, since each of them was encountering different types of resistance or reluctance to accept help.

In time, we developed different approaches for working with community leaders, be they religious [influencers], young people, women and so on, and everything was presented and discussed in the local languages with recognized leaders. “Community leaders” do not always mean community recognition.

We decided to have what we call “community expression” meetings, or tribunes, where we sit and listen to what people have to say, give them the chance to ask questions, then answer them as best we can.

People began to understand that we were there to help them solve their problems, not tell them how to solve them. For example, we say: “Ebola isn’t our problem, it’s your problem. It’s your family, your child, your community. And it’s for you to help them accept the response teams. You need to be engaged for your community. This is very important.”

The most difficult community I can remember was in a militia-controlled part of Kalunguta when the epidemic was at its height. We had so many cases of Ebola there and had to do something to control the outbreak. So, we decided to take the risk and deal with this militia group directly by having a meeting with the leader. Some of our bosses didn’t want us to go, but we insisted it was the only way to engage the community. The Kalunguta territory is almost completely under the control of military groups.

Yes, it was scary and dangerous; some of them had guns and weren’t happy to see us. But when we explained that if the outbreak wasn’t controlled, it would spread and they might die, too, they acquiesced.

I wouldn’t change the experiences I’ve had. They have taught me how to accept “give and take” and never take no for an answer!